and the story of Jandamarra

We finally left Broome and the Dampier Peninsula where we eventually spent a total of 20 days. Quondong Point was such a nice and peaceful spot we stayed there for three nights. We have now arrived in Derby, about 230km north-east of Broome. Derby (pronounced derr-bee) is a laid-back Kimberley town with Boab lined streets and huge mud flats on the edge of King Sound. Its only claim to fame is that it has the highest tides in Australia, in fact the southern hemisphere, an astonishing 11,8 meters. However, another historical fact is that Derby was the first town to be established in the Kimberley and is therefore the pioneer town of the Kimberley.

The Boab Prison Tree outside Derby is an interesting site and has an equally interesting history. It was used in the 1890s as a lockup for Aboriginal prisoners on their way to Derby, including Jandamarra, also known as Pigeon. Jandamarra led a resistance group against European settler encroachment of the tribal lands and he is in a way the Aboriginal version of Ned Kelly. During that time the European settlers were opening up large parts of the Kimberley and in the process Aboriginal people were driven from their lands. Some were rounded up and forced to work on cattle stations. Aboriginal people were also not allowed to hunt anymore on their lands and the only, easy alternative was to spear the cattle and sheep of the settlers. The Aboriginals that were caught were chained around the neck and marched to Derby to do forced labour and this is where the hollow Boab Prison Tree came in useful as a lockup. Jandamarra was also jailed for spearing cattle and after his prison term he worked on the cattle stations where he became friends with Police Constable Richardson and started working as a tracker for the police. He became a skilled horseman and marksman and was very useful to the police, but it turned out that he never abondoned his roots. During a patrol in the Napier ranges Richardson and Jandamarra captured a large group of Jandamarra's tribe, the Bunuba, and they were held in custody at Lillimura Police Post for a number of days. Jandamarra was overcome with remorse about his treason and shot Richardson, freed the prisoners, stole some weopons and dissapeared into the bush. From then on he used the ranges and caves of Windjana Gorge and Tunnel Creek as hideouts and led a resistance guerilla war for three years against the European settlers, killing at least two men. His ability to appear out of nowhere and to dissapear without a trace became legend. In 1894 he was tracked down in Windjana Gorge and shot and left for dead only to have been found to dissapear again. The Aboriginal people were in awe of Jandamarra, believing he had magical powers and was immortal. He was eventually tracked down by an Aboriginal police tracker called Micky and shot and killed in Tunnel Creek on 1 April 1897. The white policemen cut off Jandamarra's head as proof that he was dead, preserved and send it to England as an example of the effectiveness of their firearms. The Boab Prison Tree is believed to be around 1500 years old and has a girth of 14,7 meters.

Derby is the western access to the picturesque but notorious Gibb River Road (GRR). The GRR is now open for 4WD vehicles under 15 tons although parts of it are still being graded at the moment. We will just stay in Derby long enough to replenish our stocks and then start the Gibb River Road in a couple of days, first exploring the western side and its gorges and ranges. The Kalumburu road north of Drysdale River, which gives access to the Northern Kimberley and the Mitchell Plateau, is still closed but according to the Shire of Wynham the work on it is progressing and it might be opened in a couple of weeks. So we might be travelling to the Mitchell Falls and Honeymoon Bay after all and will be in the "bush" for two to three weeks. 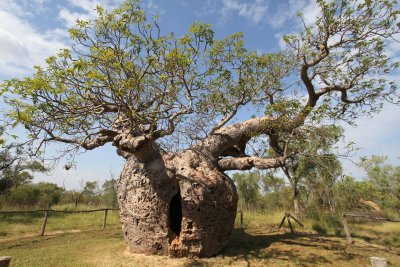 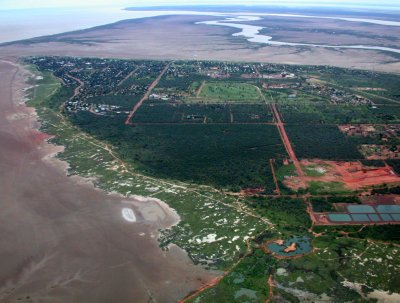 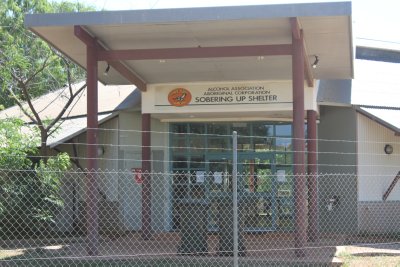 Sobering Up Center for Aboriginals Derby 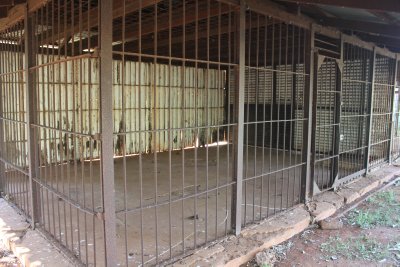 Posted by KobusM 01:22 Archived in Australia

Thanks for taking the trouble to w=rite such an excellent blog. Having travelled to these places my self and livd in some of the areas over many years it's a pleasure toe ee other enjoy them as such as I did.

One thing: can you please credit me with the photo of Derby from the air? It's lifted from my Panoramio page. I don't mind you using it, but an acknowledgement such as "©2004 Bruce R Mitchell" would be polite.