We left Memory Cove one day earlier than planned to secure a campsite in Coffin Bay National Park over the Easter weekend. We stopped in the Coffin Bay village to buy some of the famous Coffin Bay oysters and they are delicious for less than a dollar an oyster!

In the Coffin Bay National Park the 13 km 4WD track from Yangie Bay to the Black Springs campsite is extremely rough and very sandy in places. Although we deflated all six tyres we still got bogged down in soft sand on the track next to Lake Jessie. The set of MaxTrax that I bought in Tasmania came in handy and after a few attempts we got ourselves unbogged and managed to get over the sand dune without getting stuck again. It took us an hour and a half to complete the 13 kilometers.

We found a marvelous, secluded campsite in Black Springs on top of a limestone cliff with spectacular views of the tranquil waters of Port Douglas and Coffin Bay. Coffin Bay National Park offers some of the most spectacular coastal scenery in South Australia, ranging from high windswept cliffs, massive sand dunes, limestone pavements with sheoaks and black tea trees to long white beaches and sheltered waters. The bay is home to many dolphins and seabirds and the campsite was visited by Gallahs (Rose-breasted Cockatoos), Australian Ringnecks and a curious wallaby.

Coffin Bay was discovered by Lieutenant Matthew Flinders and his crew in the HMS Investigator on the 6th February 1802, a few weeks before the disaster at Memory Cove. Flinders, after his return to England in 1810, named the Bay after a friend Sir Isaac Coffin.

This is certainly one of the best campsites we have stayed in on our Big Lap. It only offers a pit toilet in terms of facilities but the remoteness and the stunning views made it a very special place to spend a few days.

We explored the rest of the Coffin Bay National Park during our stay of four days. The rough and sandy 4WD track north of Black Springs includes a nice drive on 7 Mile Beach and then 5 kilometers to get to the southern side of the peninsula to Sensation Beach. We saw young guys who crashed into rocks whilst driving on the beach at night, clearly at speed and probably under the influence. Their 4WD was wrecked with all four tyres slashed, two rims mangled badly and the steering busted. An expensive lesson!

From Coffin Bay we will start our 1,800 kilometer journey around the Great Australian Bight to get back to Western Australia. 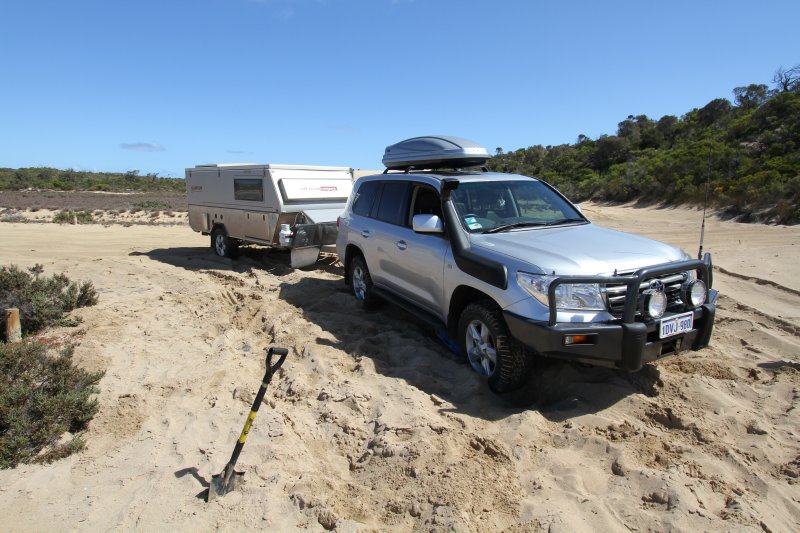 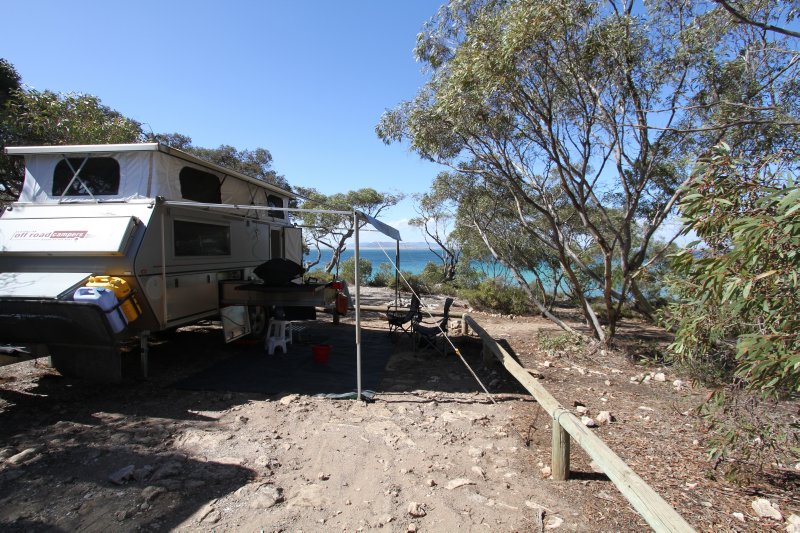 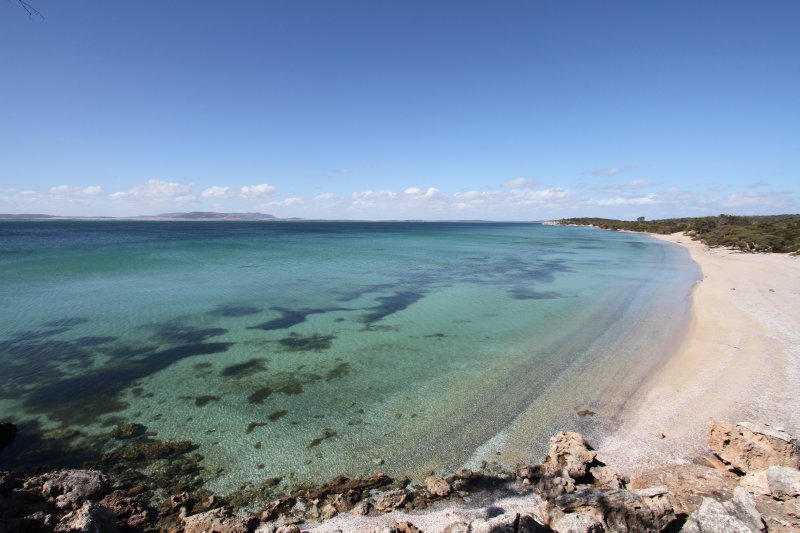 Views from our Black Springs campsite 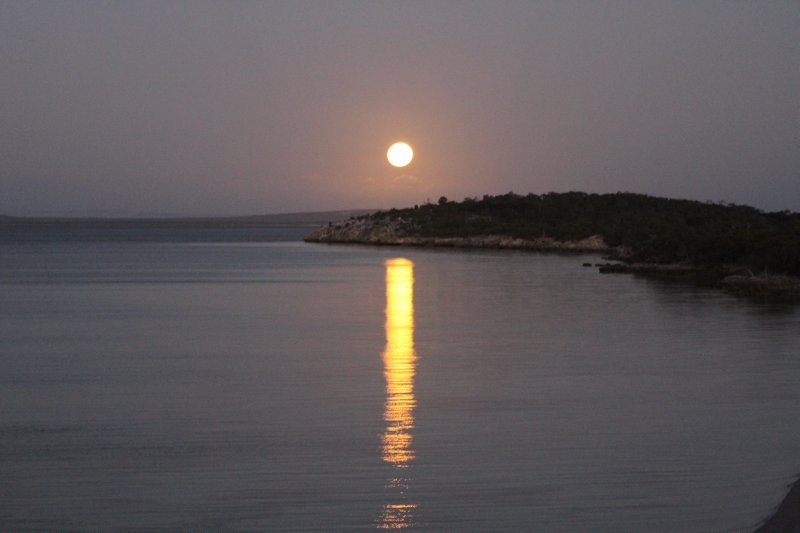 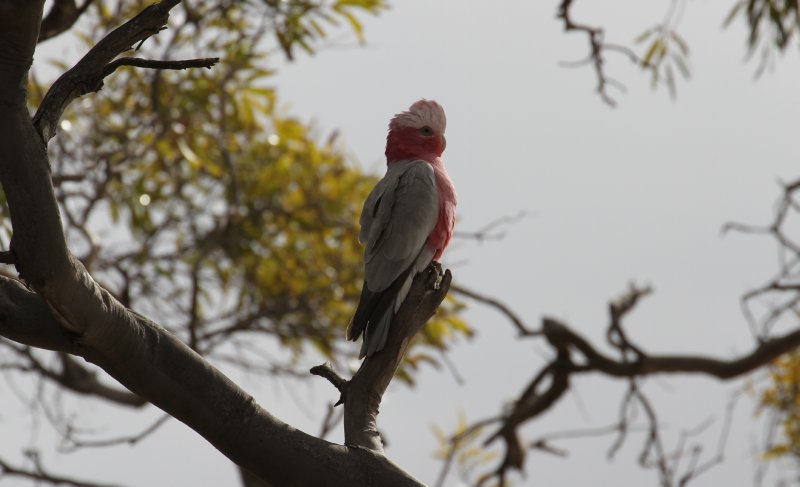 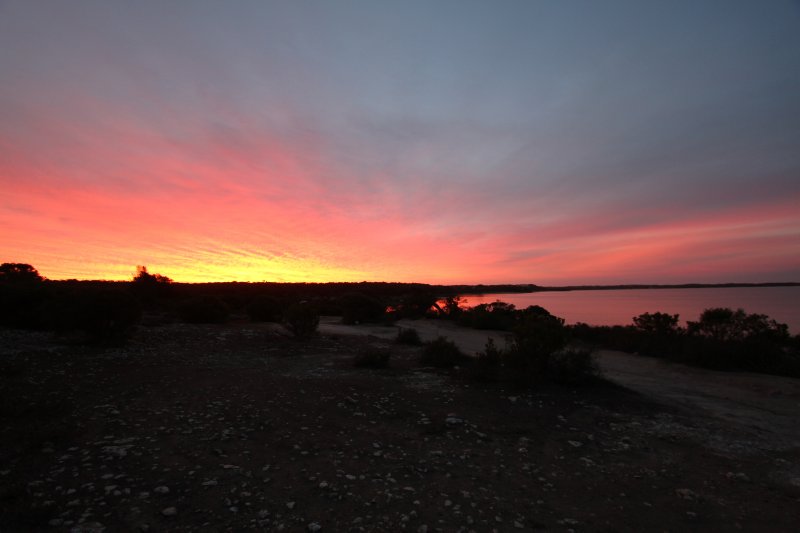 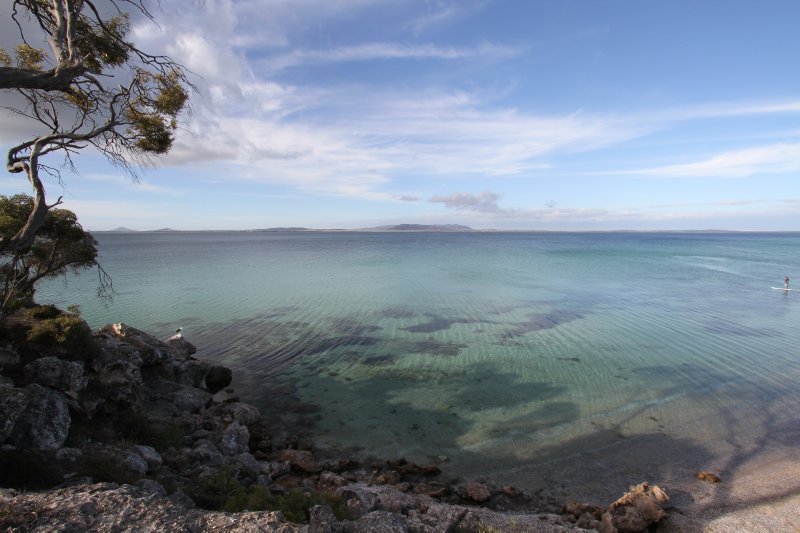 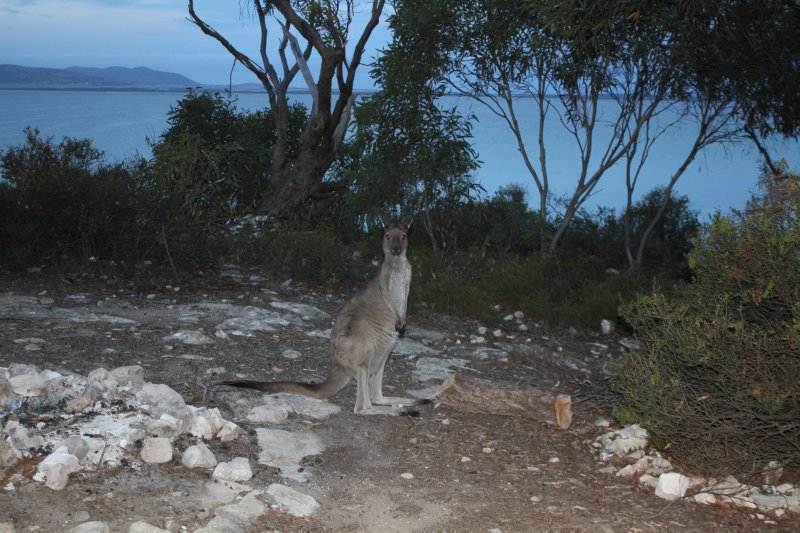 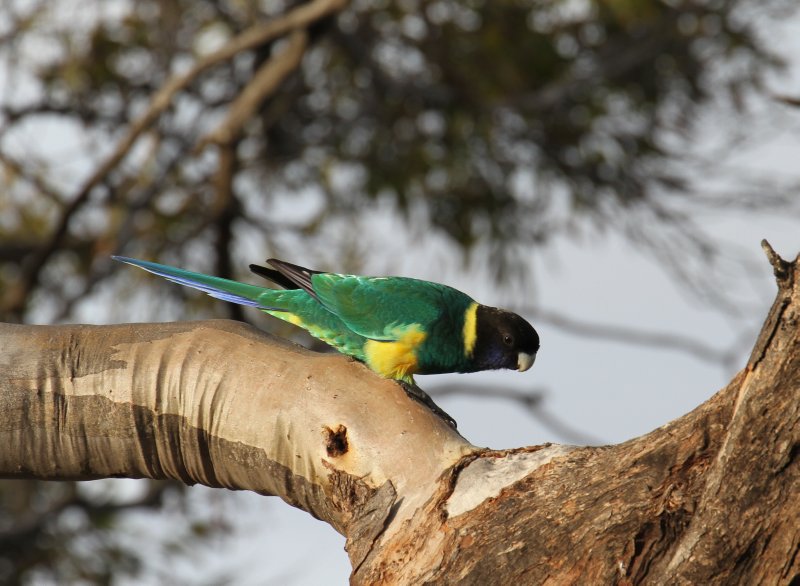 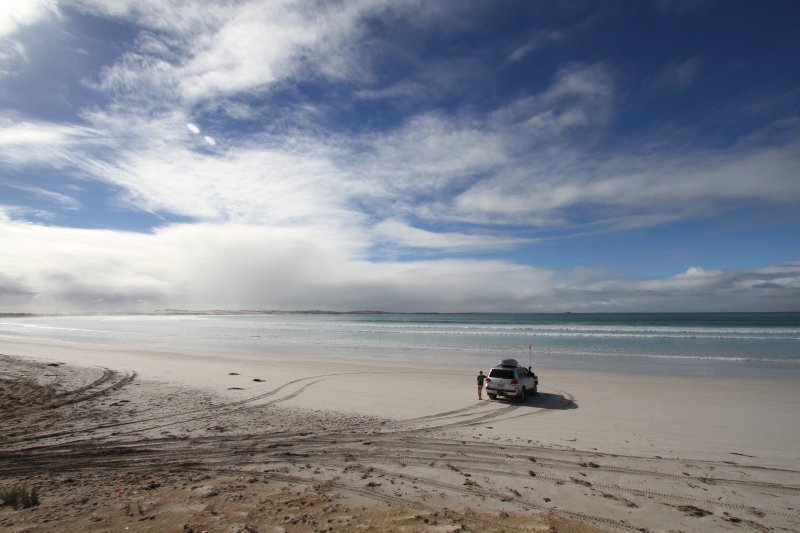 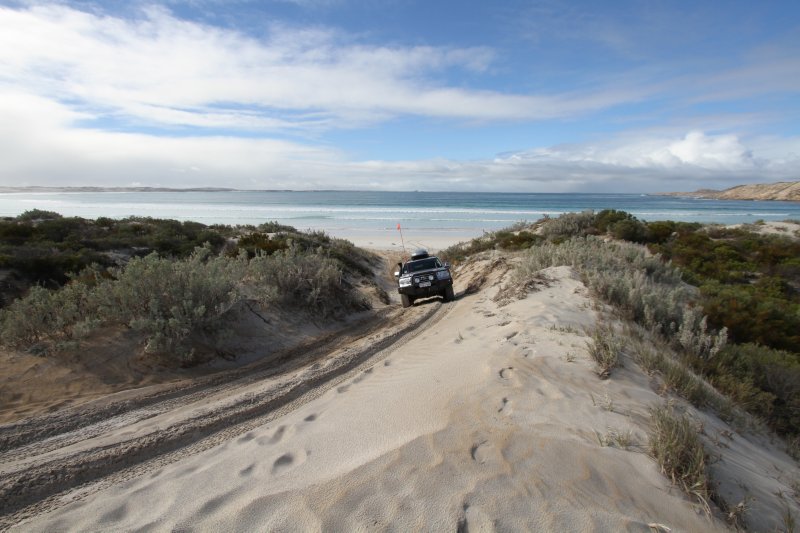 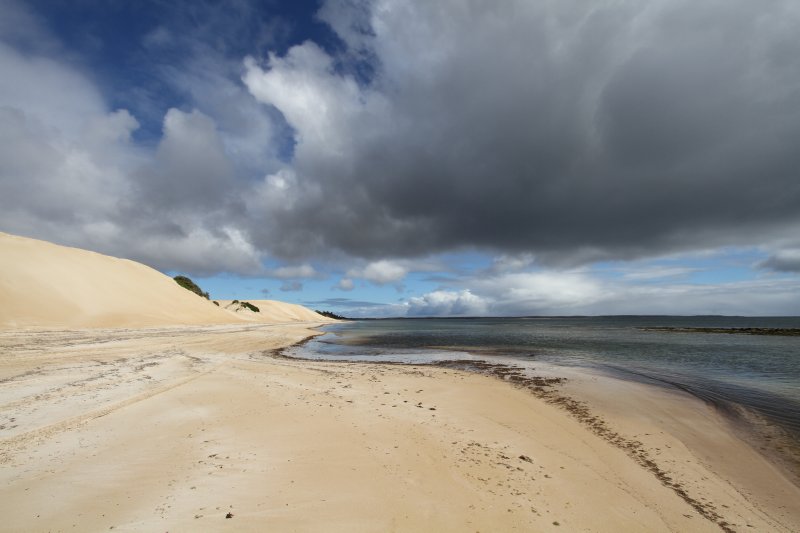 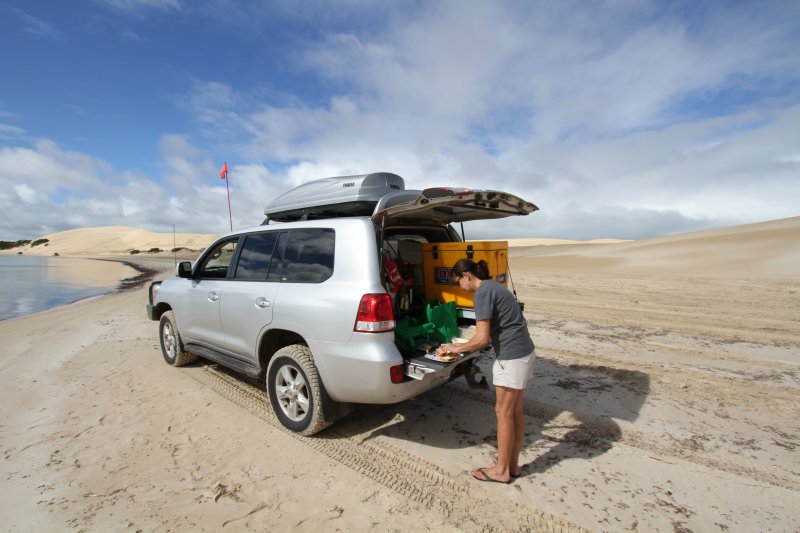 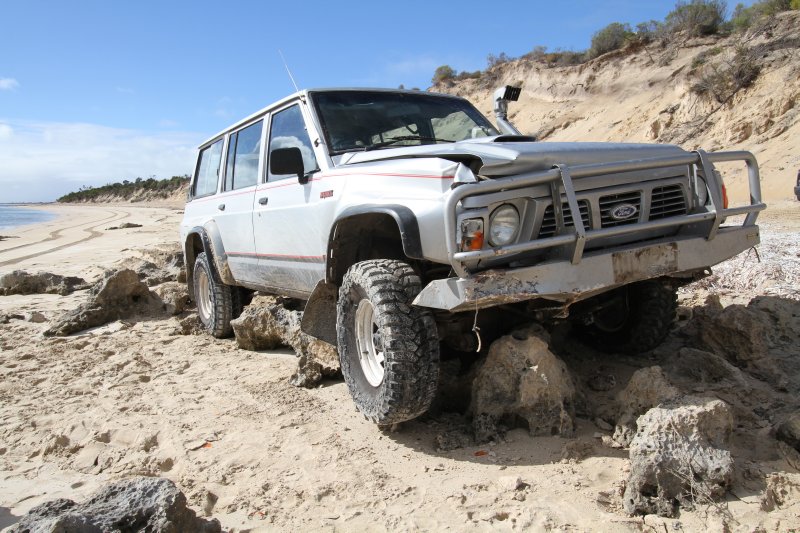 Why you should not drive on a beach at night 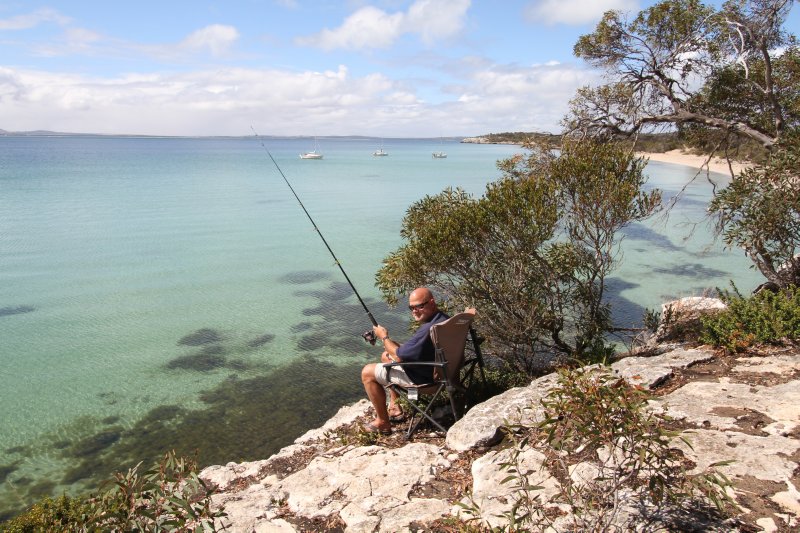 Posted by KobusM 21:58 Archived in Australia