Eighty Mile Beach is a very pleasant caravan park, 9km off the Great Northern Highway between Port Hedland and Broome, on the beach and in the middle of nowhere. The beach is really eighty miles long and is great for beach driving and shell collecting. I have never seen so many shells on a beach in my life. The place is peaceful and tranquil and we could have stayed much longer but in the end stayed three days and twice took the opportunity to drive on the beach for many kilometers. It is easy to find a remote spot on the beach, just park anywhere. It is the longest and broadest beach I have ever seen and I just loved it.

Eighty Mile Beach was devastated by a cyclone in December 2008 and the trees in the caravan park still show signs of a heavy battering.

There is no mobile phone or broadband coverage on Eighty Mile Beach so we could not be distracted by the internet but could also only post the blog until after our arrival in Broome. We will be spending Easter weekend in Broome. 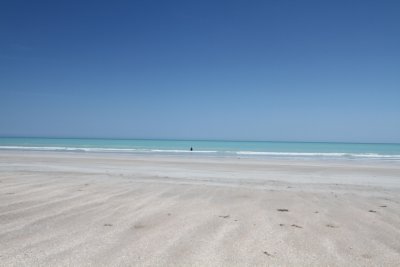 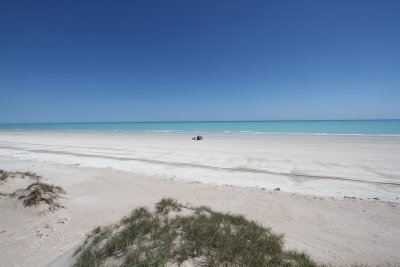 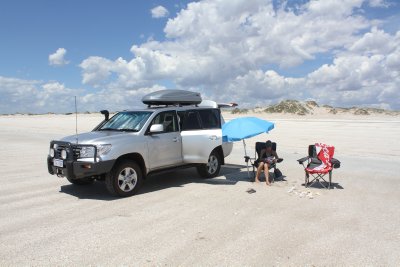 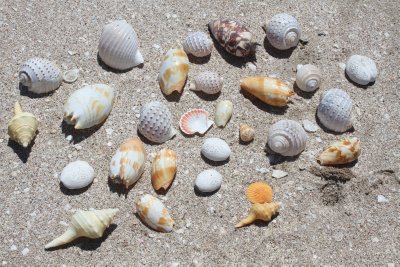 Posted by KobusM 01:42 Archived in Australia

Seems like a nice place to be! Just the sea and the beach with no disturbance from far off places like Orebro for example. Enjoy!

I wish you welcome back to civilization and a
HAPPY EASTER! (any egg around to paint? :-)

Hi Kobus and Lorraine! Wow, what a priviledge to be able to see, experience and enjoy all these wonderful places! I have thoroughly enjoyed reading all your entries to now and it seems to me like you are having a GREAT time out there and that you have adapted to this kind of life really fast, especially taking care of the laundry in the middle of nowhere, Lorraine

Thanks for sharing this great experience with us. Have a wonderful Easter weekend! Take care, Tiekie

Hi Kobus,
Glad to see you guys are enjoying your adventure. Lars and I will be in Australia around September. Maybe we can meet for a drink.
Take care.
Scott