Finally I boarded the live aboard boat named Spoilsport, departing from Cairns for a four day diving cruise on the far northern Great Barrier Reef and Osprey Reef. Lorraine did not join me as she is not a scuba diver and she stayed behind in Cairns to catch up with her studies. I did a similar three day live aboard trip from Townsville in 1998 with the same operator, Mike Ball Dive Expeditions, and it was the best diving experience I have had. I was looking forward to this trip for a long time. We left Cairns late on Thursday afternoon and the first evening was spent meeting everybody during drinks and snacks as well as briefings on the dives we are going to do over the next three days. Spoilsport is a twin hull, 30 x 10 m boat that cruises at 15 knots and carries maximum 23 passengers, mostly advanced divers, but on this trip we were only 16 divers.

I woke up early on Friday morning and I had a feeling of excitement as we cruised north in the shelter of the Great Barrier Reef. On deck we were greeted by the fabulous turquoise waters of the Ribbon Reefs. To port I recognised Cape Bedford and Cape Flattery and to starboard are the reefs and the vastness of the Coral Sea. Our first dives were at Cod Hole at the northern tip of the 10th Ribbon Reef. We dived with small diver size potato cod and spend the rest of the dive amongst shallow sunlit coral gardens of acropora coral and ventured deeper into the parallel gullies forming the front of the reef where huge Queensland groupers face into the current. These were many white tip reef sharks lying calmly on the sandy patches between the reefs.

After the dives at Cod Hole we moved down a few kilometers to the southern part of the 10th Ribbon Reef and did an afternoon and night dive at Gotham City, named after the many batfish that hang around the area. Gliding along, surrounded by schools of silver trevally, surgeon fish and yellow striped bream we explored pristine coral gardens in excellent visibility, except for the night dive of course.

That concluded our Great Barrier Reef dives and we departed for Osprey Reef in the Coral Sea and cruised out of the protection of the barrier reef into the open ocean. It was quite a bumpy and rocky night but I arrived at Osprey Reef without any sighs of sea sickness. Osprey Reef — a good example of an isolated oceanic reef — is located within the Coral Sea Islands Territory, situated around 330 km northeast from Cairns, Queensland. It lies some 125 km east from the Great Barrier Reef and 220 km due east from Queensland's Cape Melville. It is the northernmost reef on the Coral Sea Shelf. The reef is roughly oval in shape, measuring 25 km in length and up to 12 km in width, covering around 195 km². The lagoon, which is up to 30 m deep, is nearly completely enclosed, except for a narrow pass on its western side. The beak-like feature at the north end of Osprey Reef is known as North Horn.

We did a couple of dives at Fairy Grotto and Halfway, both fantastic dive sites with more than 30 meter visibility with spectacular walls disappearing to 1000 meters. The afternoon we cruised to a dive site called Admiralty Anchor, named after an anchor that is visible in one of the swim through tunnels. We again did an afternoon and a night dive. The following morning we did a very unique dive with Nautilus, made possible by two of the divers who are from the University of Cumbria and are busy doing research on Nautilus, which is considered to be a living fossil. These amazing creatures were around before the time of the dinosaurs and are still surviving without the need to evolve. The scientists trapped 14 nautiluses overnight in cages with chicken bait. Nautilus lives between 500-800 meters deep and ascent at night to about 40 meters to feed. Unfortunately their numbers are dwindling due to the trade in their beautiful shells. After the scientists did their measurements and took DNA samples, we took the Nautiluses with us on the dive to handle them underwater and photograph them. Afterwards they were released into the deep unscathed. What a unique opportunity to dive with these living fossils!

The next morning we cruised to the most northern point of Osprey Reef called North Horn and did an amazing shark feed dive. A bucket filled with fish heads was lowered to the reef where we all had taken up ring side "seats" in a natural amphitheater. Even before the bucket was lowered many sharks, mostly white tip and grey reef sharks, a potato cod and other predator fish were circling amongst us in anticipation of the feed. The numbers grew when the bucket was lowered and when it was finally opened remotely by one of the instructors it rapidly changed to a feeding frenzy with all the sharks having a frantic go at the fish heads. I estimate there must have been at least twenty to thirty sharks participating in the feed. Another amazing dive!

The last two dives were also on Osprey Reef called False Entrance and the coral and sheer walls that plummet to 1000 meters were just amazing. We glided past huge black coral trees, diver size soft coral trees and golden gorgonian fans. We saw huge schools of Bigeye Trevally (Jacks or Kingfish) and Bigeye Barracuda. Some divers saw a manta ray and there were many white-tip reef sharks around too. 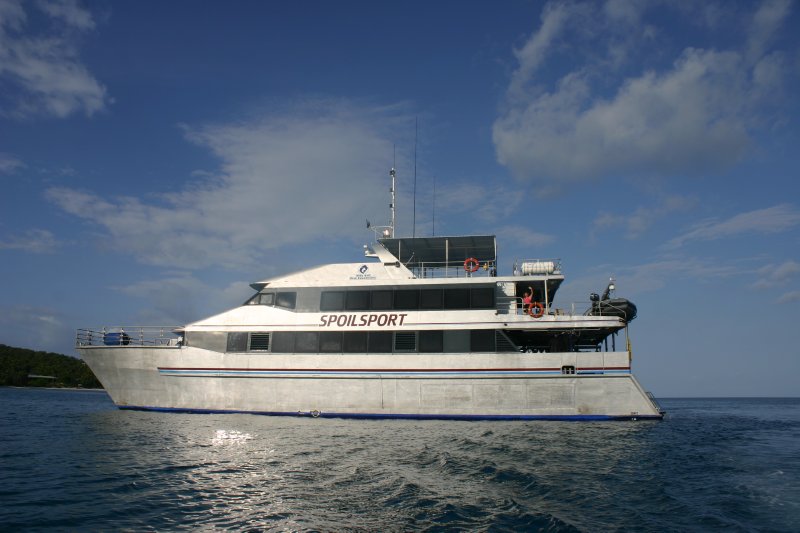 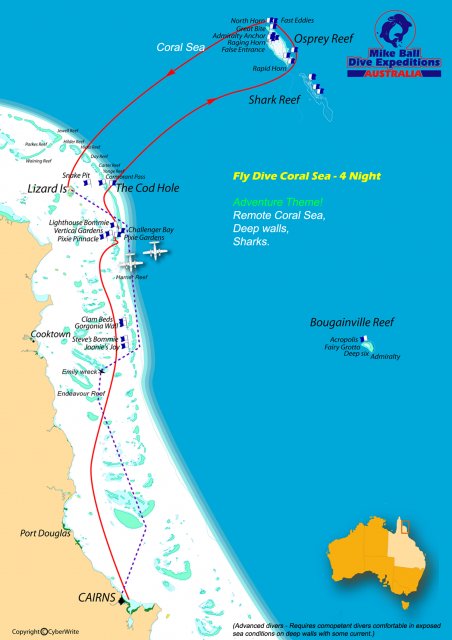 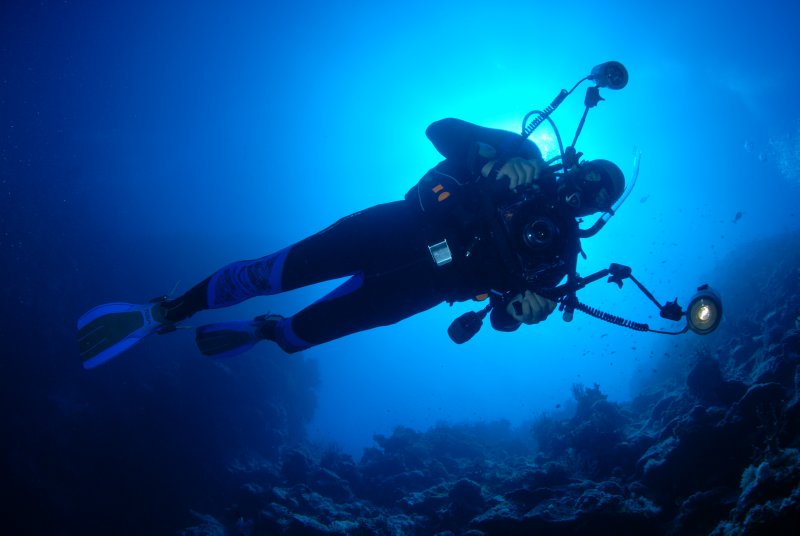 Me in my favourite position 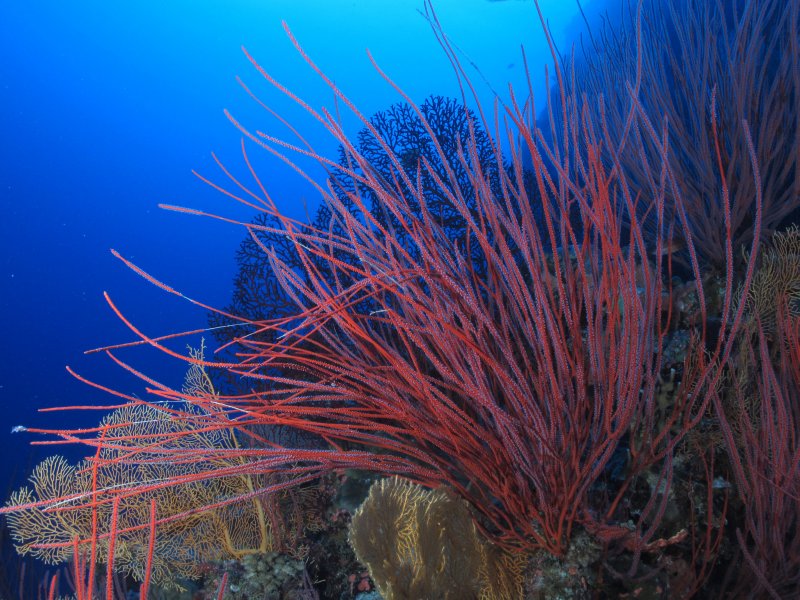 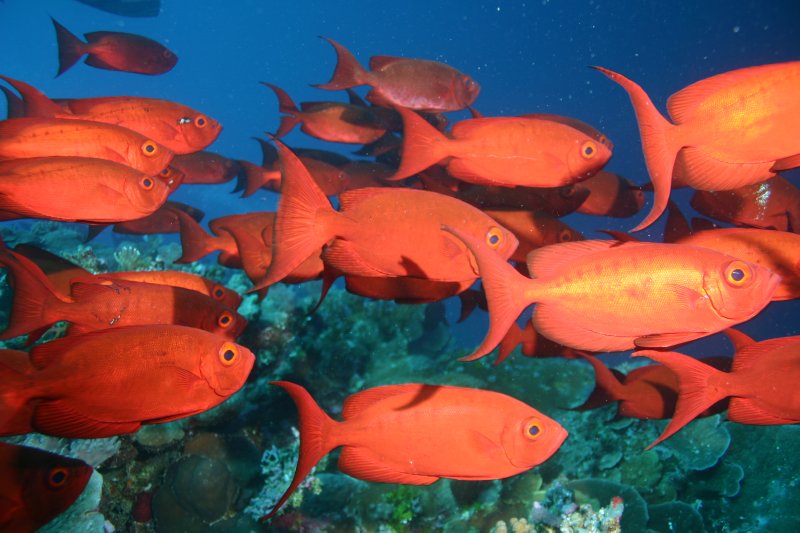 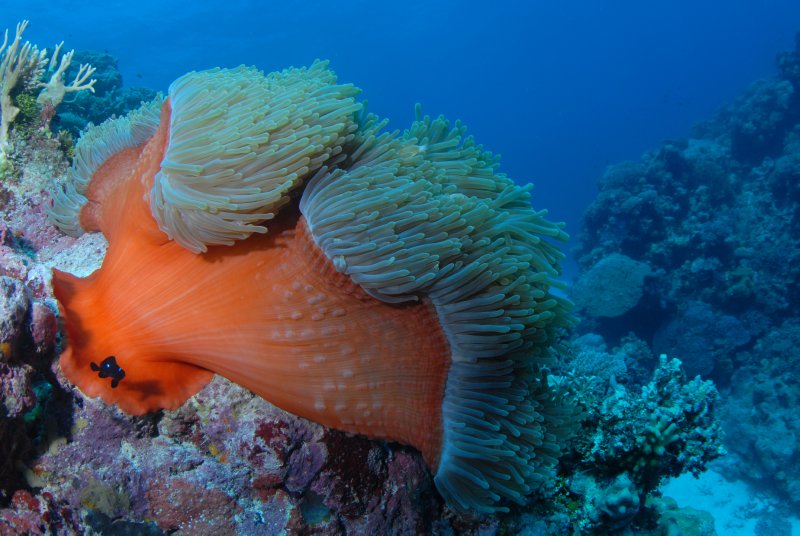 Domino fish on an anemone 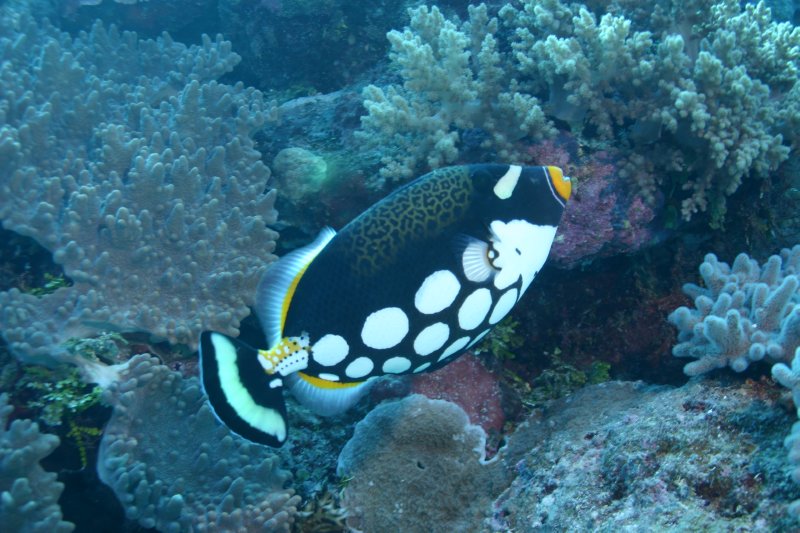 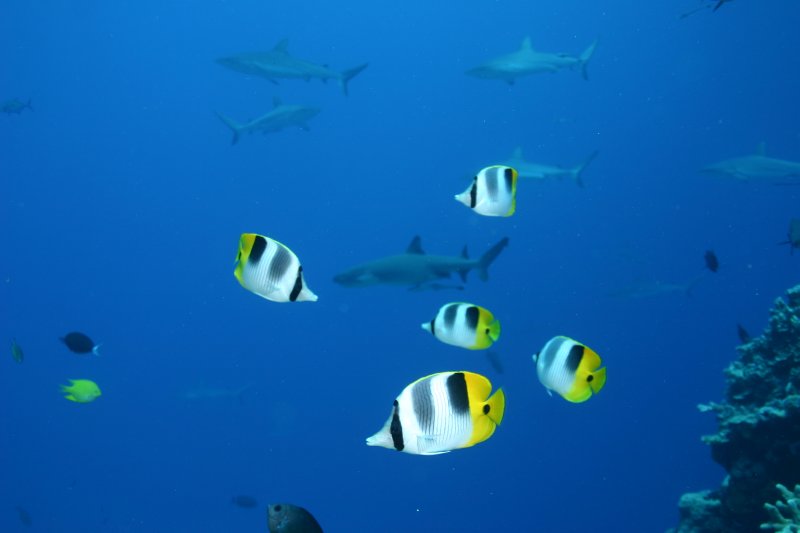 Double-saddled butterfly fish with sharks in the background 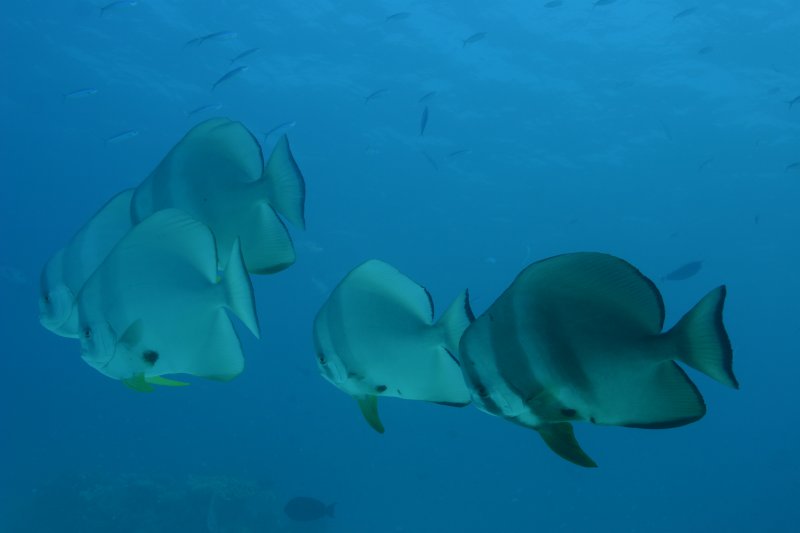 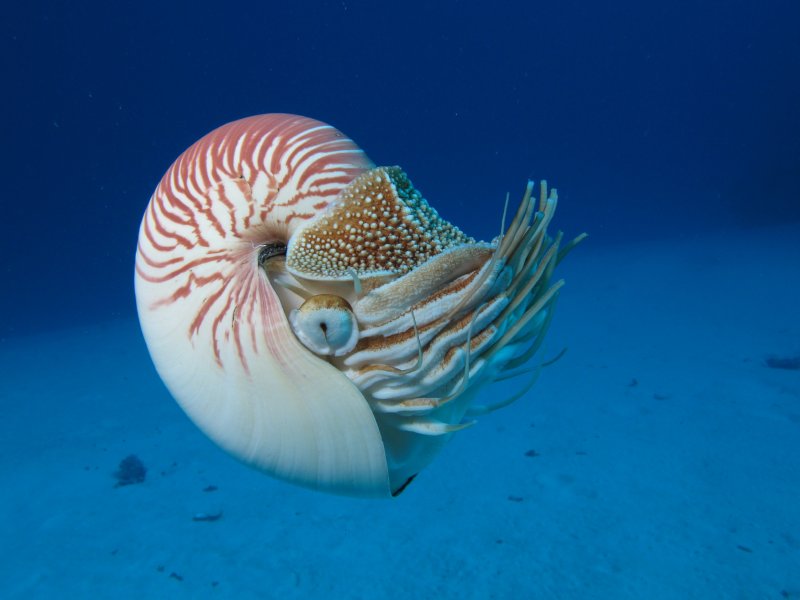 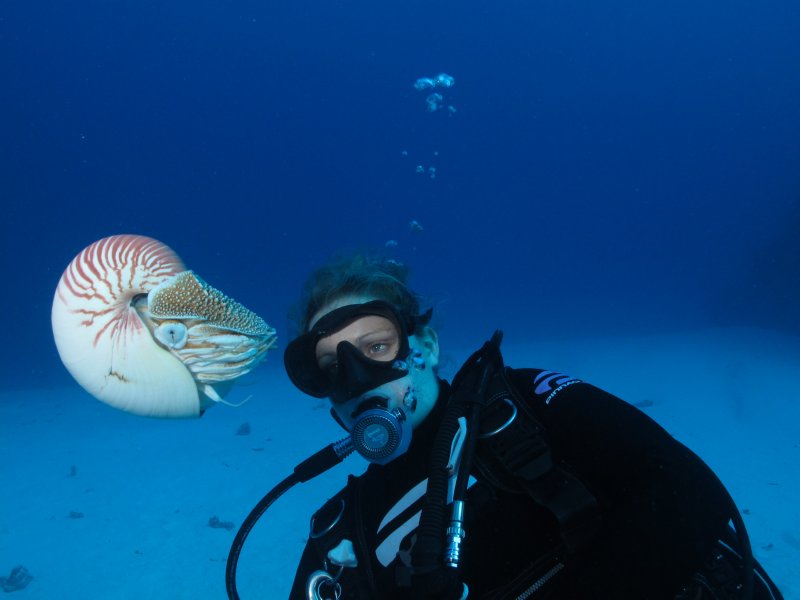 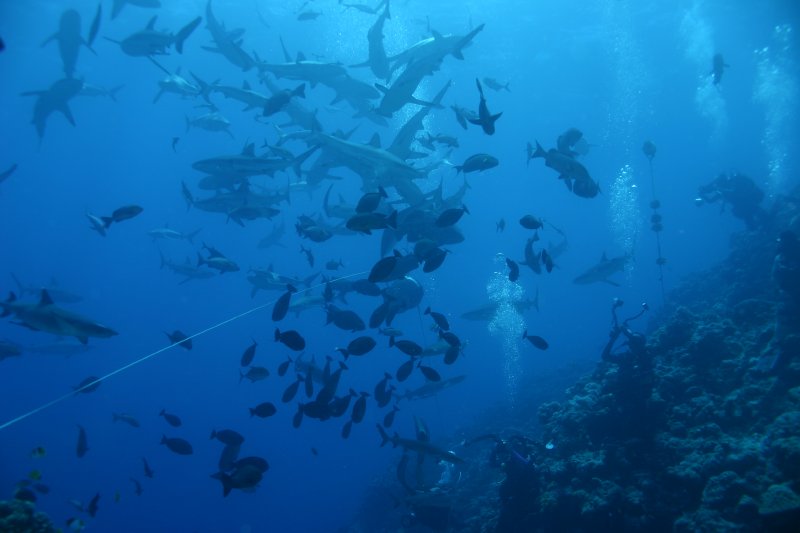 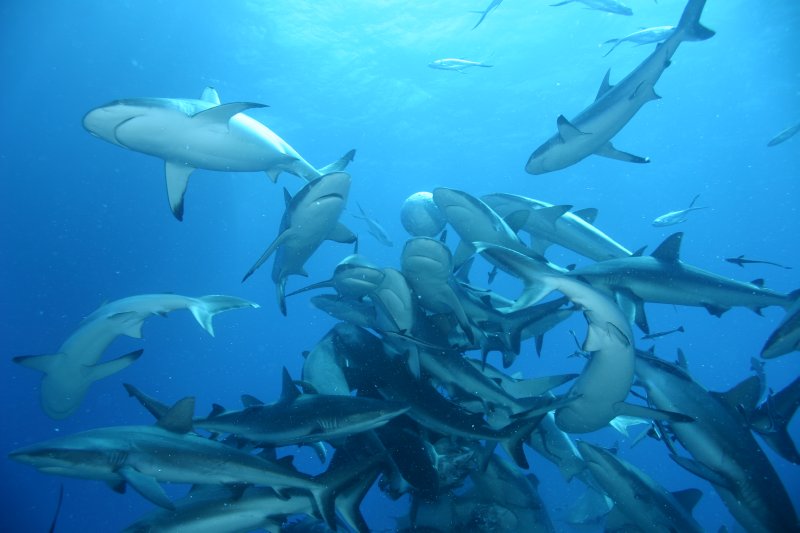 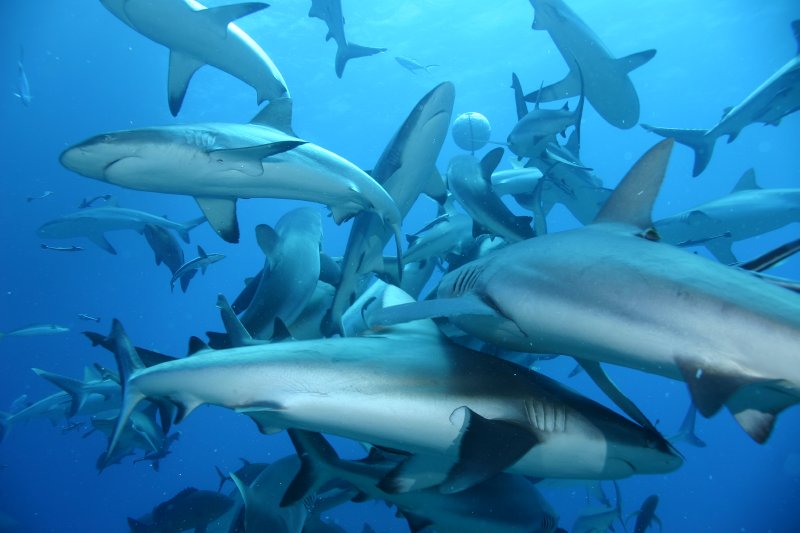 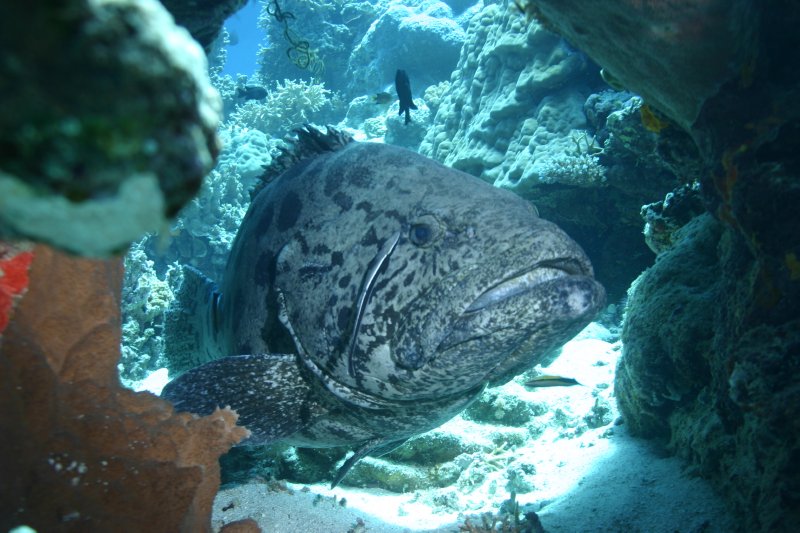 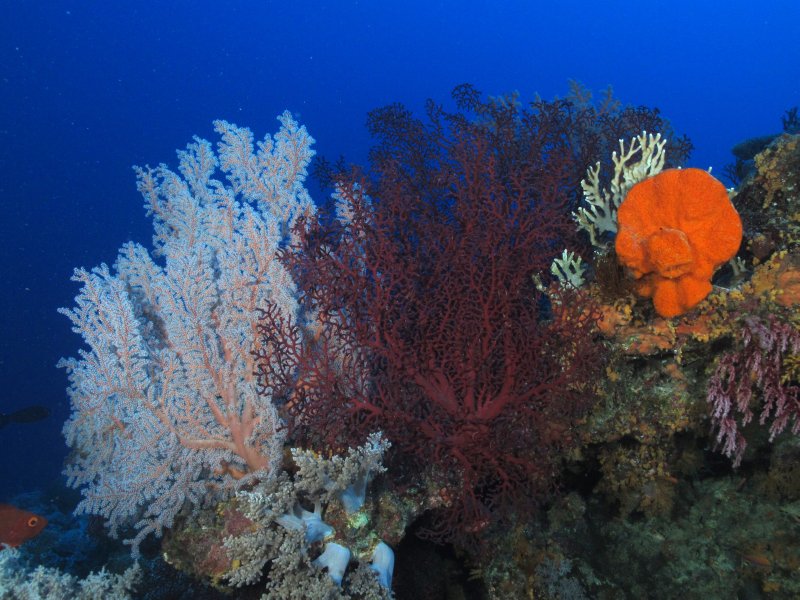 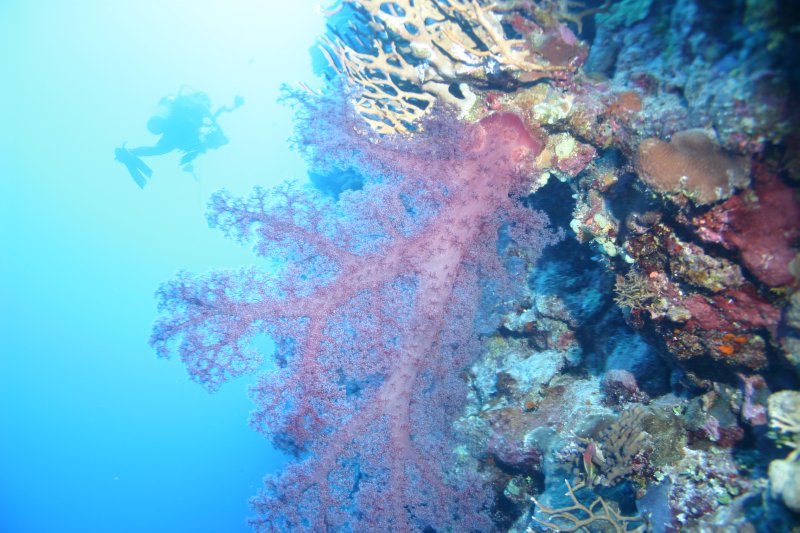 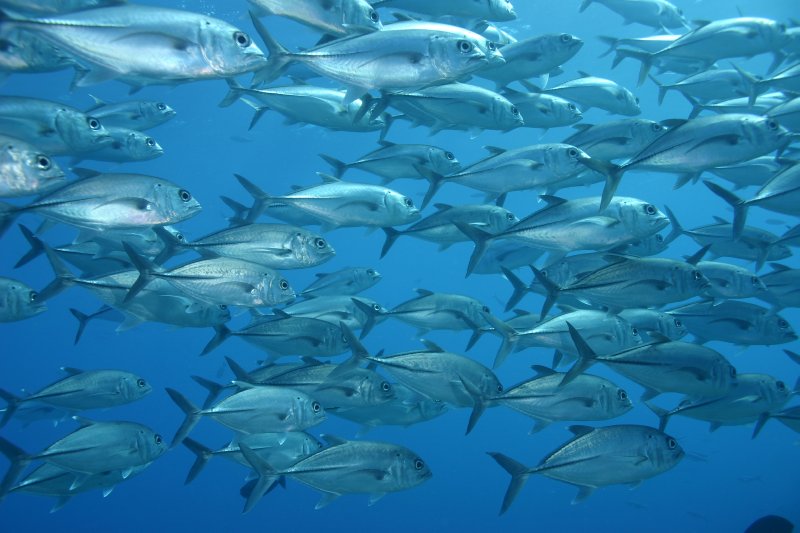 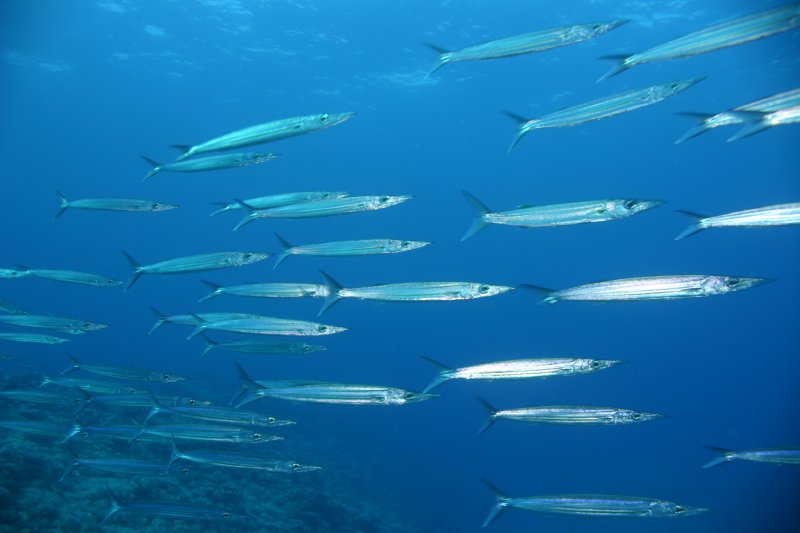 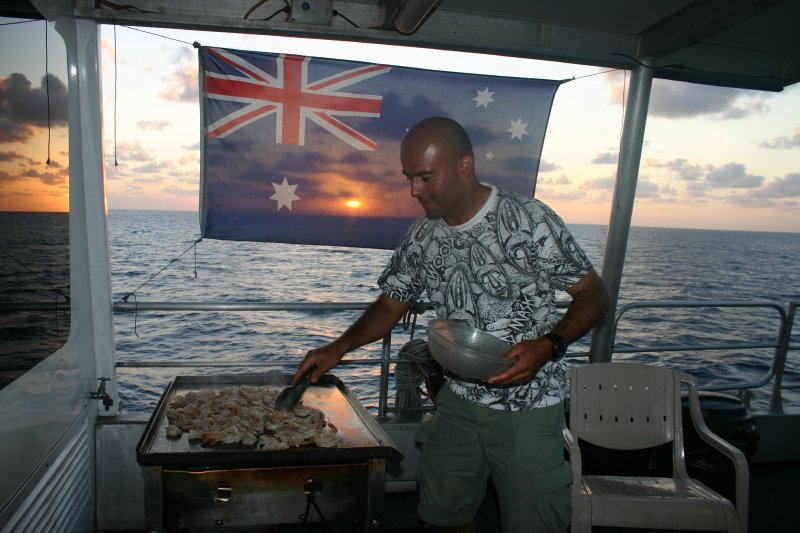 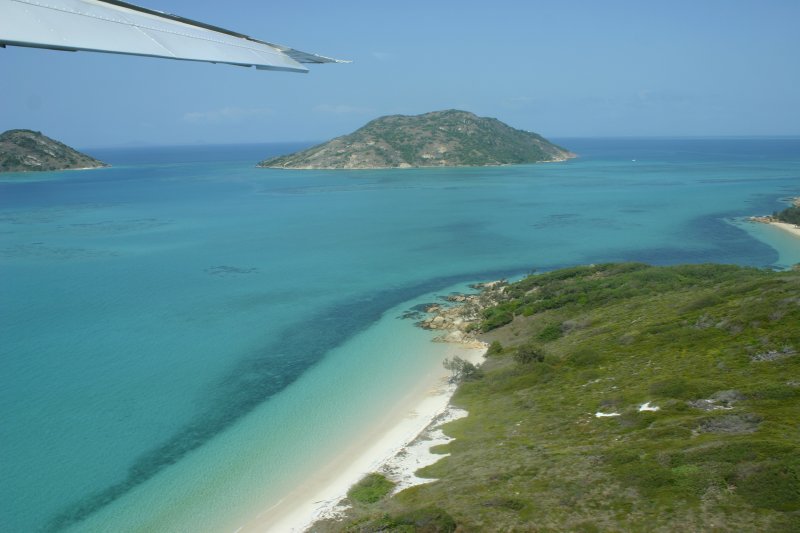 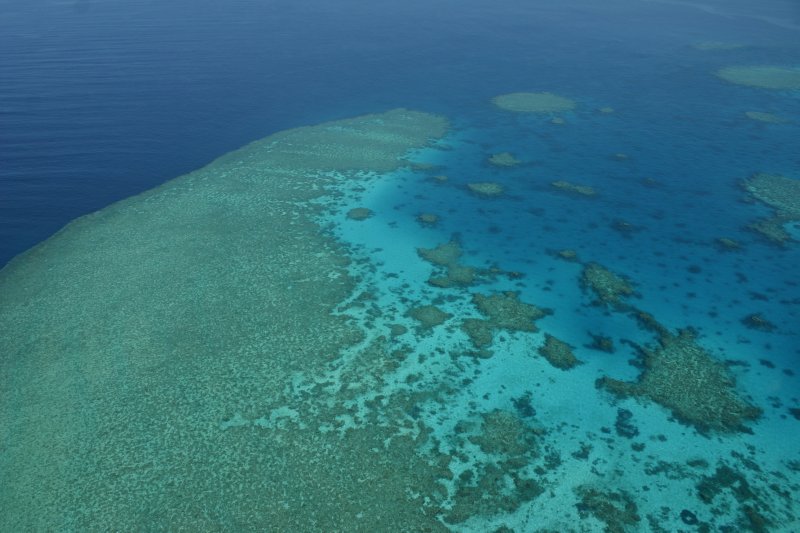 Posted by KobusM 03:00 Archived in Australia

Wow Kobus, beautful pic's. I decided that I'm going for a scuba course on my next break. You must have been in heaven.