A extremely challenging 4WD track, not recommended for vehicles towing trailers or caravans.....but it is possible.

From Captain Billy Landing, on the east coast of Jardine River National Park, we travelled back on the 27 km tropical forest track and saw a group of bush pigs at a creek crossing, a rare sight. We travelled south on the Southern Bypass Road until we turned off east onto the Frenchmans Track which is a “short cut” to Iron Range National Park on the east coast.

I have read that the Frenchmans Track is a difficult 4WD only track with a deep crossing at the Pascoe River, but little did we know what we were letting ourselves in for. The start of the narrow single track was already bad as it was severely corrugated but we pushed on hoping we would get better patches. It just got worse as we went on with fallen trees blocking the track and bypass "tracks" which are extremely tight to negotiate with the Quantum to avoid hitting the trees. Further on the track started to be become deeply rutted with extremely deep washouts that made it almost impossible to keep any of the six wheels of the Land Cruiser and Quantum from slipping into the deep ruts or washouts. At this stage we realised that we could not turn back as the bush was too thick on both sides of the track for the two vehicles to turn around. So we pushed on, stopping at each obstacle to assess the plan of action to get around or through it.

We crossed several small creeks and the tracks leading in and out of the crossings were very deeply rutted and extremely muddy. We managed to get through these without incident and about 11 km into the track several off-road motorcyclists approached us. They told us that the Pascoe River was flowing waist deep and that the tracks into and out of the river were extremely steep, rocky, narrow and slippery. They told us two vehicles with trailers turned around as they deemed it too risky to cross from the other side of the river. At this stage we had serious doubts about our chances to get through but decided to continue on to the river and assess its severity for ourselves. We couldn’t turn around anyway so we had to continue and hoped that there may be space at the Pascoe River to turn around if necessary.

About 20 km into the track, after crossing the boggy Wenlock River with lots of effort, we were slowly negotiating a very difficult part of a deeply rutted and washed out part of the track when the Quantum’s right wheel lost traction. It slipped down a washout and crashed against the steep track wall which left it leaning at an angle of about 40 degrees against the walls of the washout! Both our hearts sank into our shoes and our immediate thoughts were: how on earth will a recovery truck be able to get here to recover us? After calming down, I assessed the situation and saw that a thick tree was within reach for a winch recovery. It took a few minutes to set up the winch and recovery strap and miraculously we were pulled out of the washout with only a few small scratches to the Quantum and a bruised finger that I got caught in the winch. What a relief that was!

However, the worst was still to come. We pushed on through numerous bad spots, tight fallen trees bypasses and boggy creek crossings until we eventually reached the top bank of the Pascoe River. When I saw the severely washed out and rocky track, full of obstacles, going down a very steep decline into the river, my heart sank into my shoes for the second time. I waded through the river, ignoring the crocodiles that could have been there (although the water was very clear and I would have spotted them). The river was now flowing about 750 mm deep and the river bed was very rocky with deep holes and large rocks. The exit from the river was even more difficult as it was very narrow and slippery with rock obstacles and deep track washout walls on both sides. The turn-around option came to mind again but there was absolutely nowhere to turn around with the van behind the vehicle, so unless we want to quit and call for a very expensive and time consuming recovery (if at all possible), we only had once option to take the river crossing on.

We eventually took about an hour to get through the scary Pascoe River crossing and its steep entry and exit, stopping every 10-20 meters planning the placement of the Land Cruisers wheels, keeping in mind where the Quantum’s wheels will end up. At two points, on the sharp decline into the river I used rocks to build steps to make the sharp drops from some of the big rocks more easy, and on the exit of the river to get the Quantum’s right wheel a little ramp to get over a big boulder that prevented it from being pulled out of the water. The final exit out of the deep washout took all the brutal power of the Land Cruiser's 4,7 liter V8 to pull the Quantum to the top of the track, all four wheels spinning.

Once we got through the Pascoe River we thought it would be easy going, as described in one of the travel books, but that was not true. The road continued for another 11 km in the same extremely difficult pattern as before the river. We finally exited the Frenchmans Track onto the main road to Iron Range National park, exhausted but thankful that we made it safely. The trip tested my four wheel driving skills and our ability to work as a team to the limit and we were thankful we did the 4WD training course in Perth before we started the tour.

The photos in this blog do not do full justice to the actual severity of this track but gives you some idea of the conditions and the sequence of events. 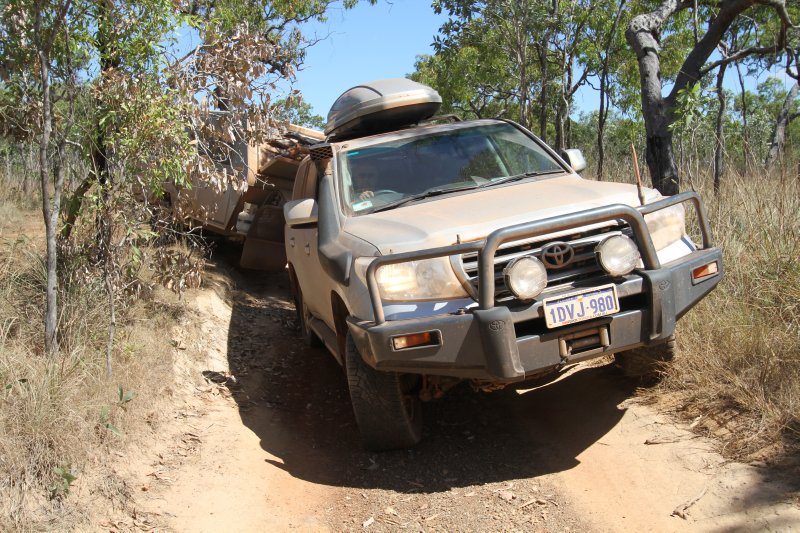 This was still the easy part of the Frenchmans Track 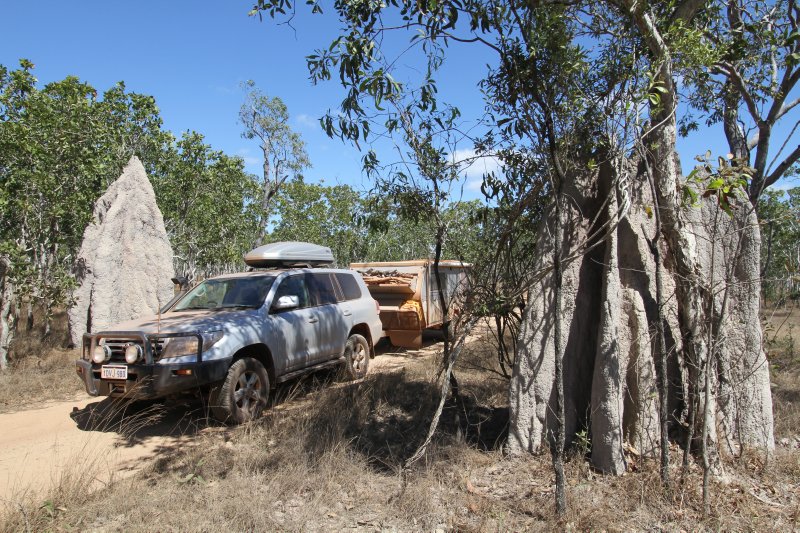 Scenic part of the Frenchmans Track 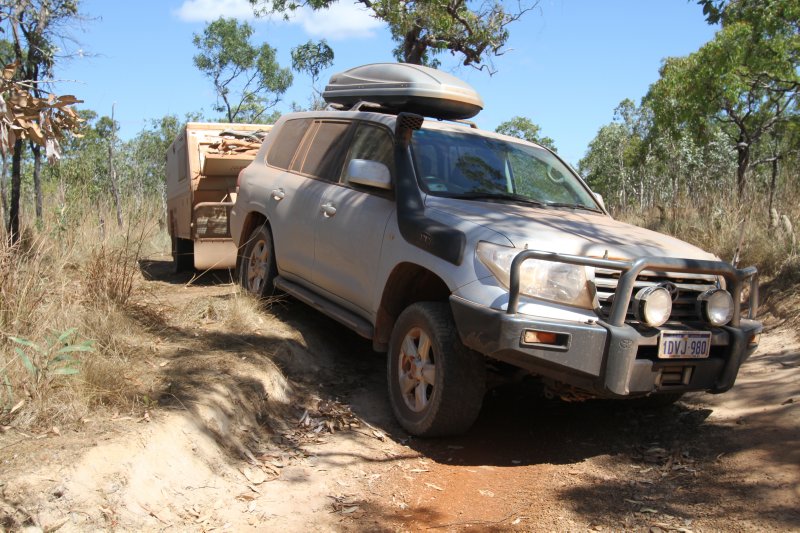 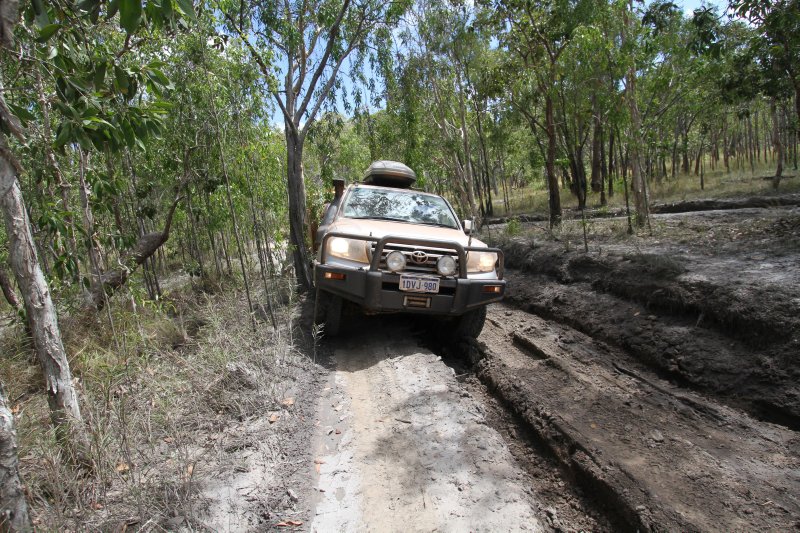 Getting more difficult and tricky 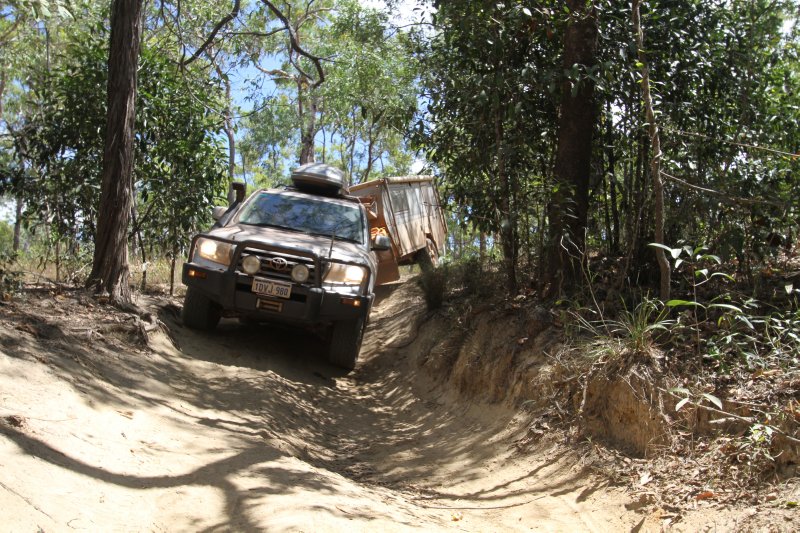 Nowhere to turn around 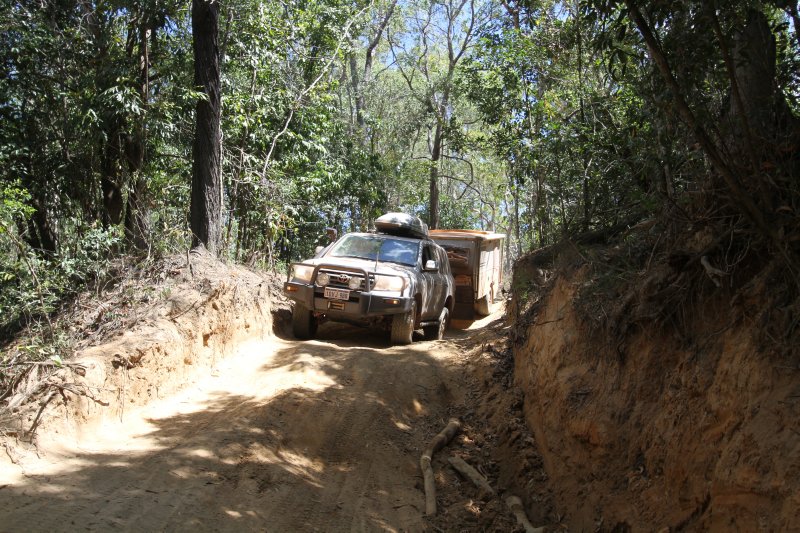 Getting deeper.... into trouble 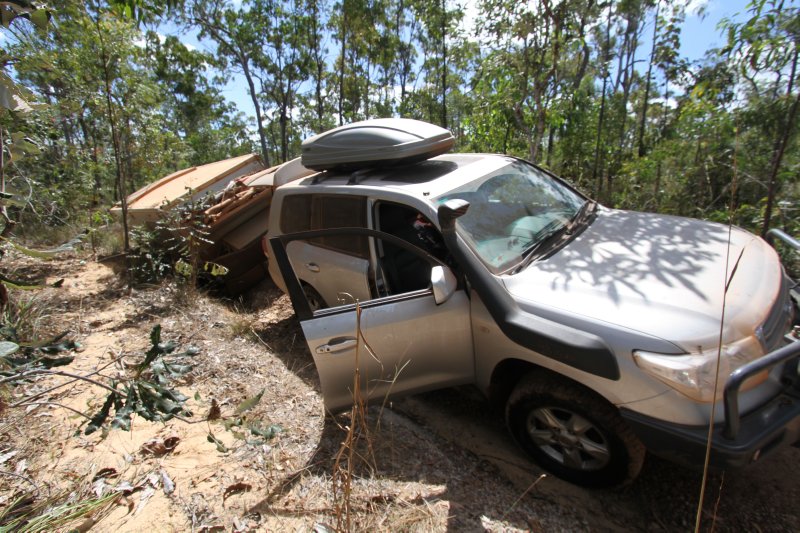 Oops!... time to use the winch for the first time 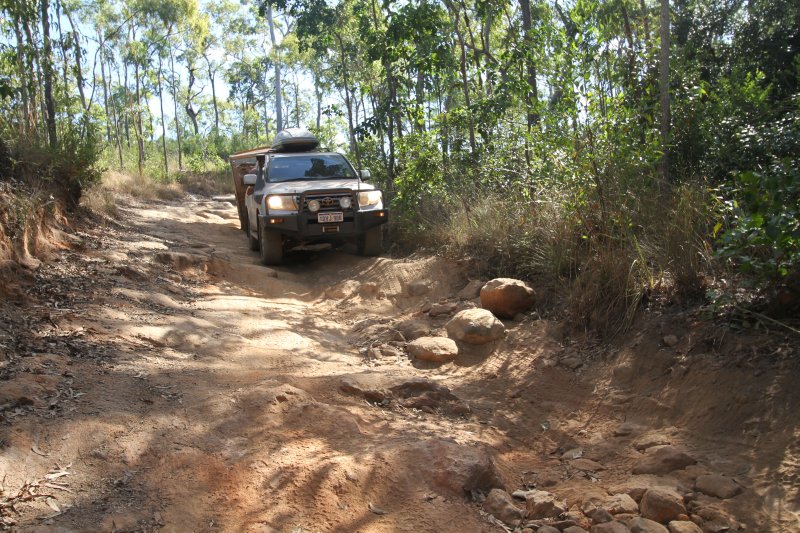 Negotiating one obstacle at a time 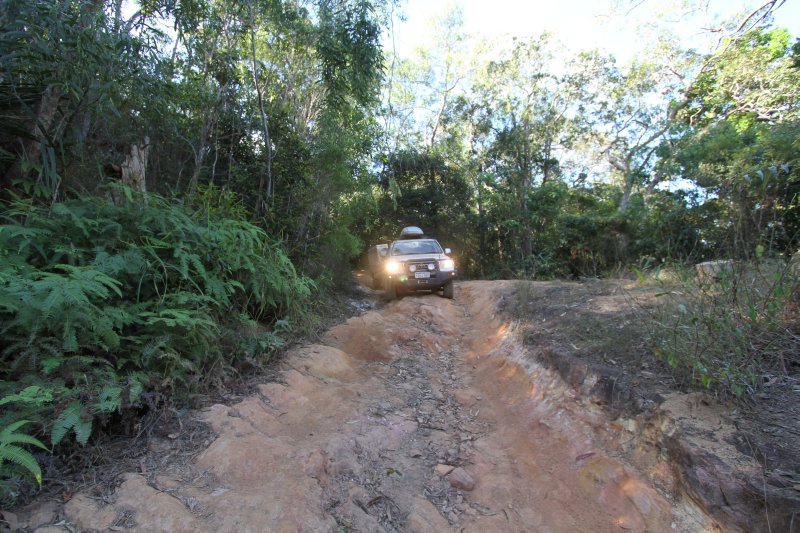 Will we ever get through this? 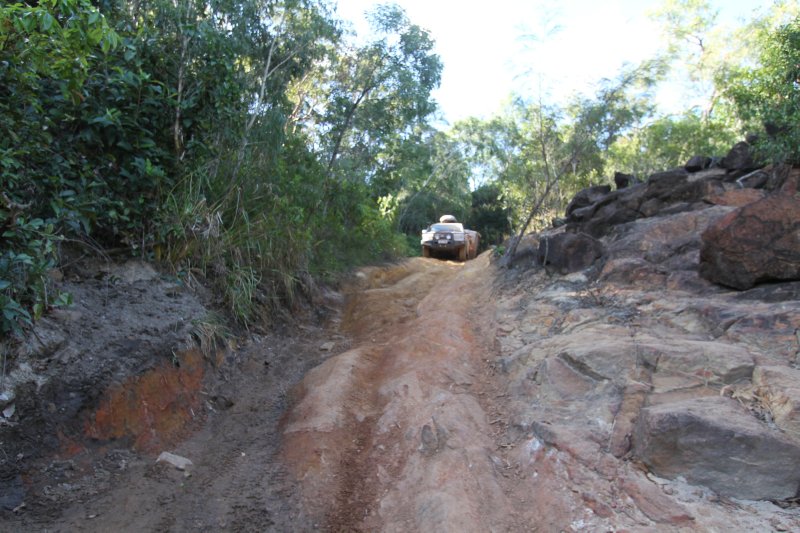 This is where it gets really hairy....the decline to the Pascoe River bank 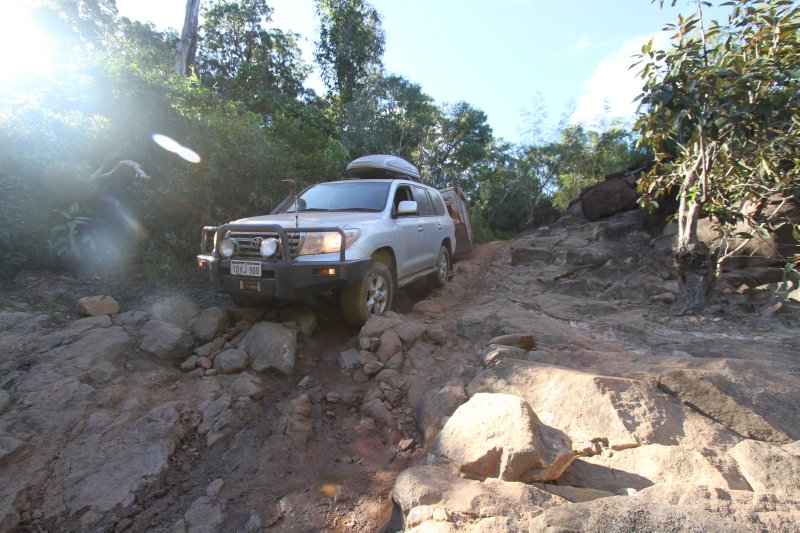 Now it turns from hairy to scary ! 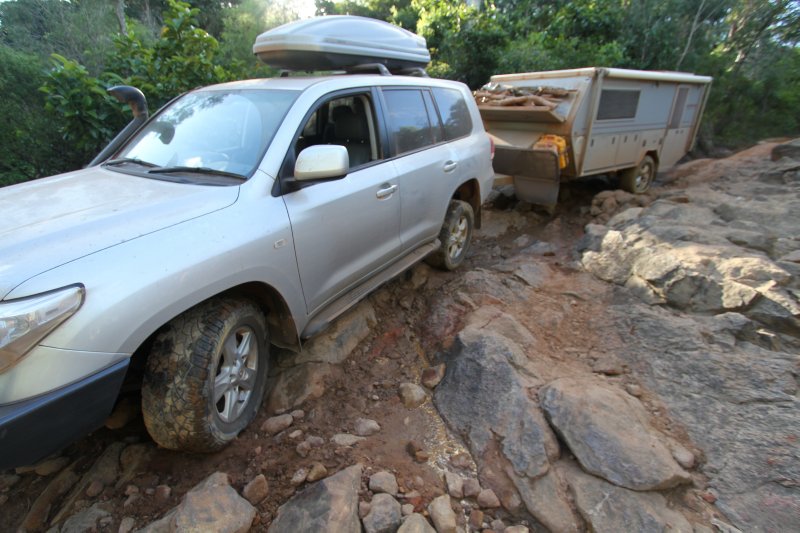 This is not a track for towing a caravan, even if it is an off-road 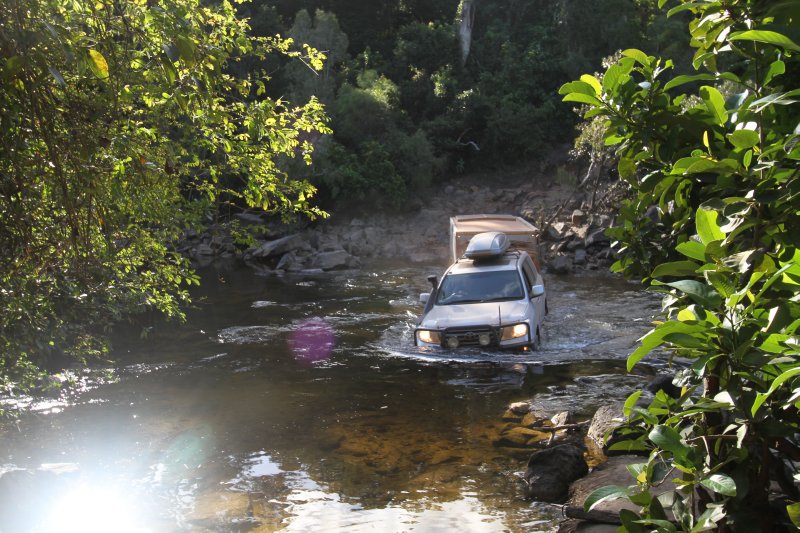 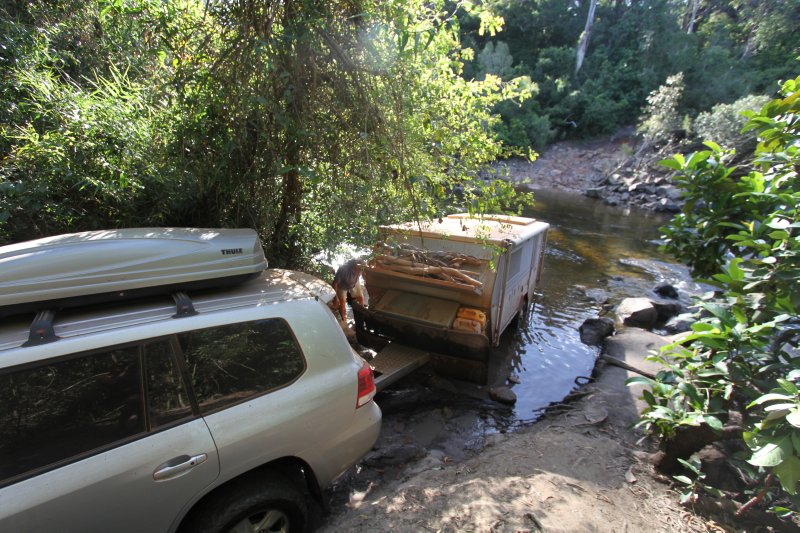 Laying rocks to get the Quantum out of the river 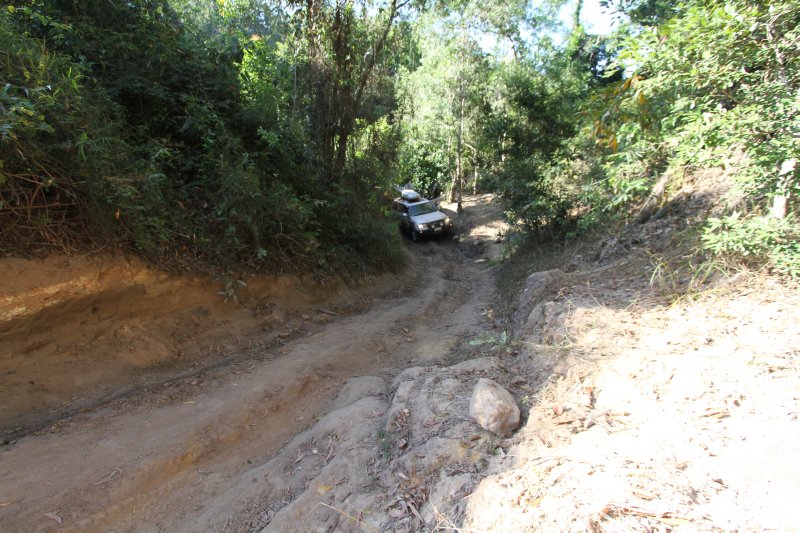 Here is a video of a guy who did it in a Prado. It looks much easier without towing something

Posted by KobusM 15:29 Archived in Australia

It all just looks horrendous. I bet you are glad that you did the 4 wheel drive course

That must have been very difficult but I'm sure you enjoyed it. Will follow you on a a regular basis. Enjoy and send my regards.
Ian