Through the remote Sturt Stony Desert

We travelled from Marree in South Australia to Birdsville in Queensland along the famous 520 km long Birdsville Track. It is very remote and passes through the Tirari and Sturt Stony Deserts which is strikingly beautiful in their harshness. The track passes close to Lake Harry and we saw a number of Black Swans on the lake. Further on we saw a mob of Emus, Australia's largest, flightless bird, very similar to the African Ostrich. The track itself was almost perfect in the south, being freshly graded and we travelled at an average speed of 90 km/h. We stopped to have lunch at the interesting Mungerannie Hotel and travelled further north to the remote campsite at Tippipilla Creek where we spent the night and enjoyed the clear night skies with the clear Milky Way displaying its splendour. The northern part of the track was more rough with hardened mud tracks most of the way but the trafffic had already flattened most of it so we could travel at a reasonable average speed of 80 km/h. With lots of recent rain the countryside is green with lots of flooded pans and flower patches along the way.

We crossed the border into Queensland, turned our clocks 30 minutes forward and stayed in Birdsville Caravan Park for two nights. Birdsville is a very small outback town (pop. 115) on the edge of the Simpson Desert. It is well known for the Birdsville Horse Races that are run here at the end of August every year. The Birdsville Hotel, established in 1884, has an interesting outback pub and we had a nice dinner there one evening.

We used the opportunity to visit the Simpson Desert and drive to the top of its highest dune, the Big Red, towering about 40 meters above the surrounding field and Lake Nappanerica, which has a lot of water at this time. Many 4WD enthusiasts flock here to drive to the top of the Big Red which is purely for fun as there are other roads around it. Lake Nappanerica has lots of birdlife and it is a nice day out from Birdsville, about 35 km away. 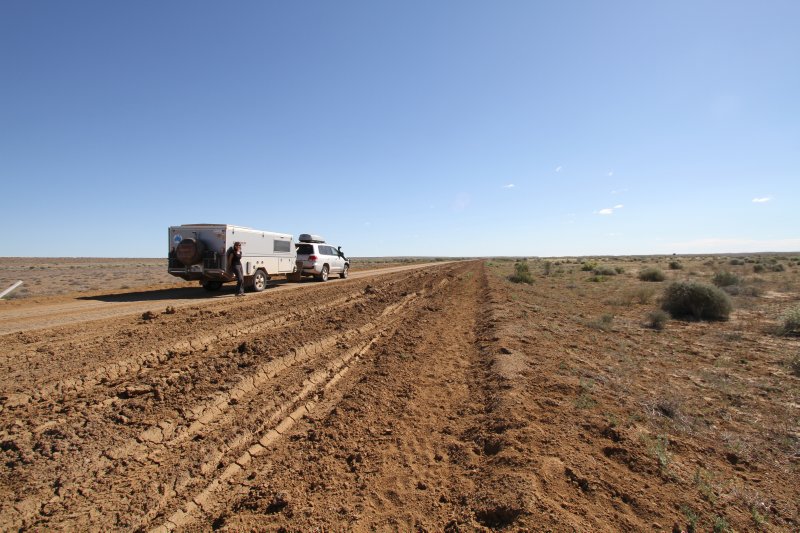 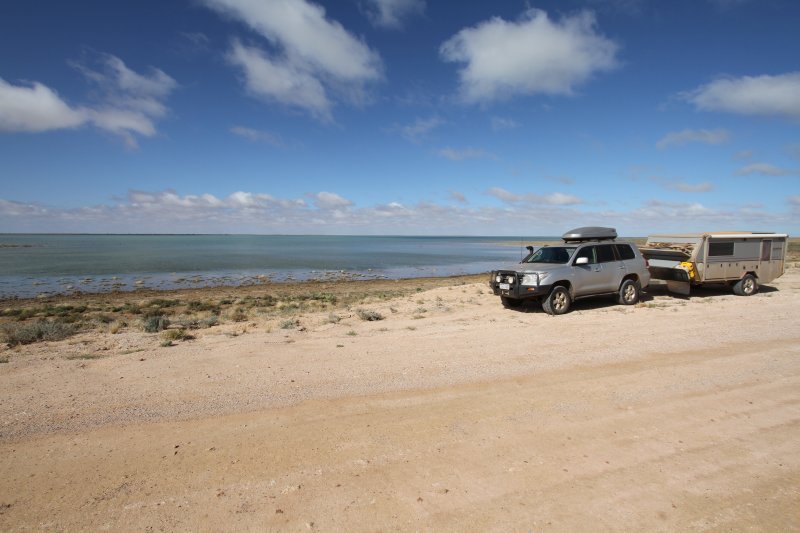 Lake Harry on the Birdsville Track 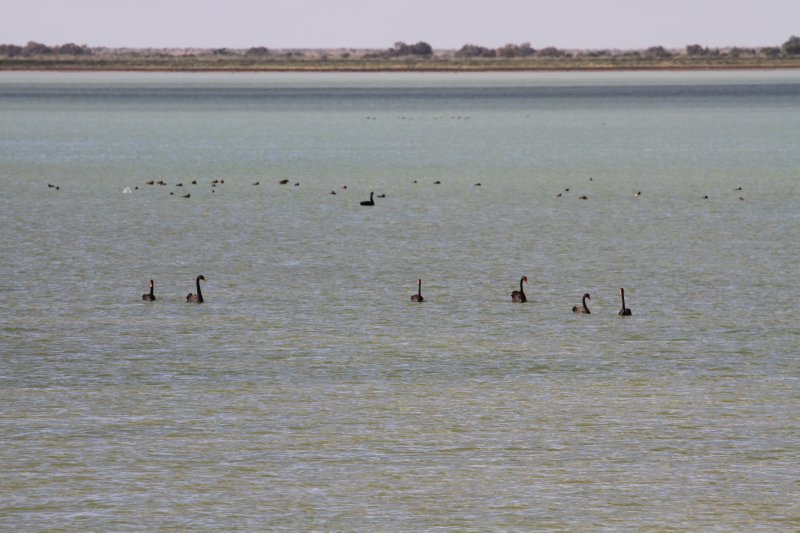 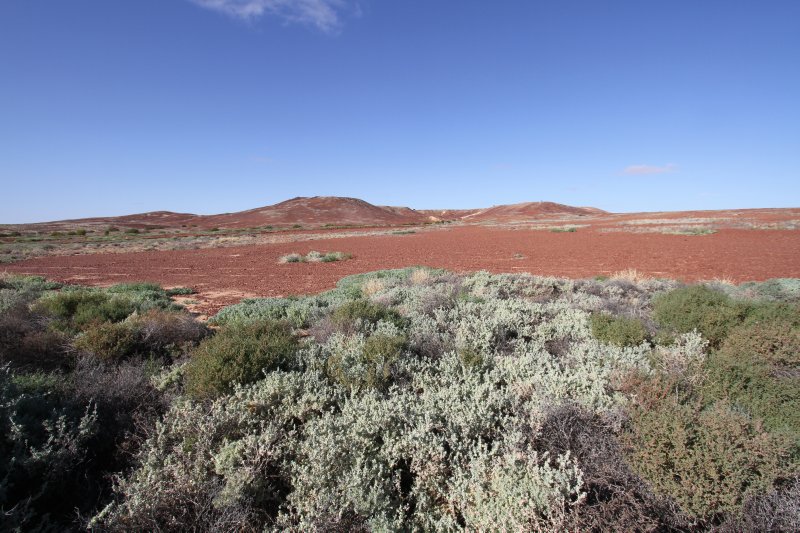 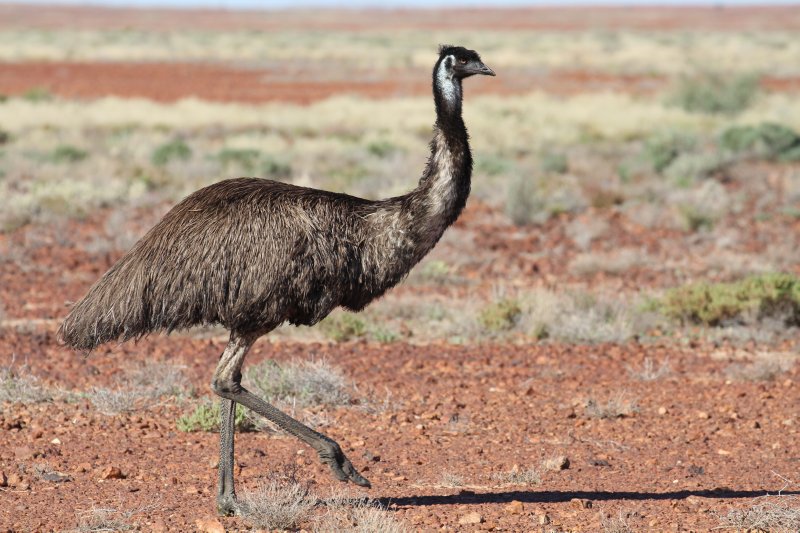 Emu in the Sturt Stony Desert 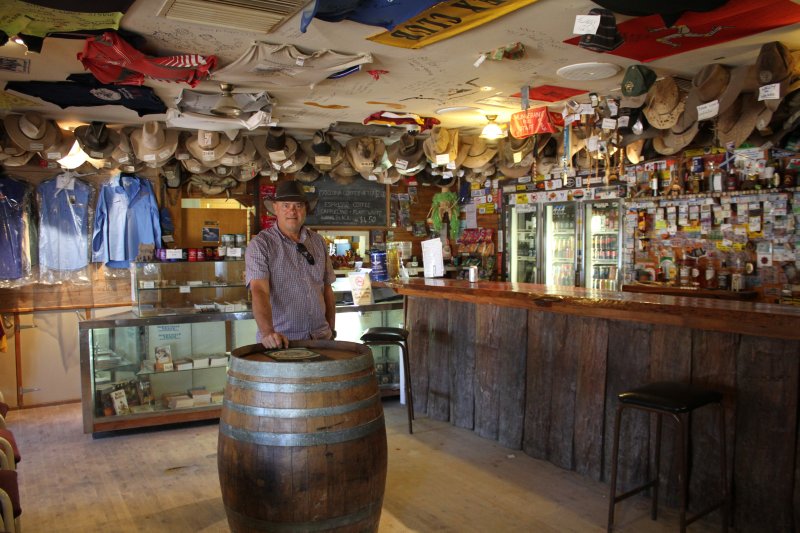 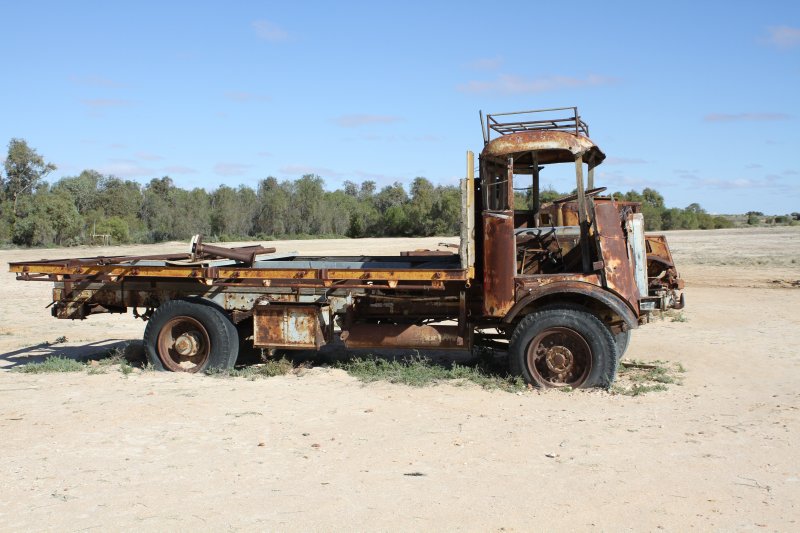 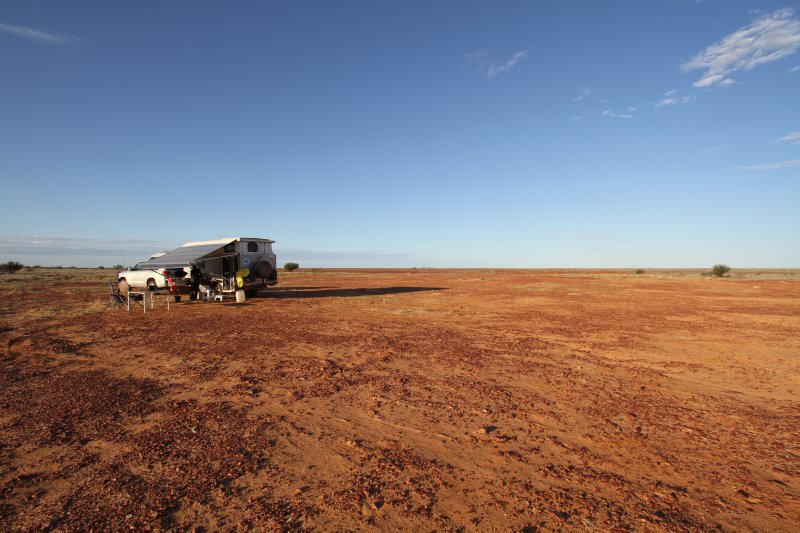 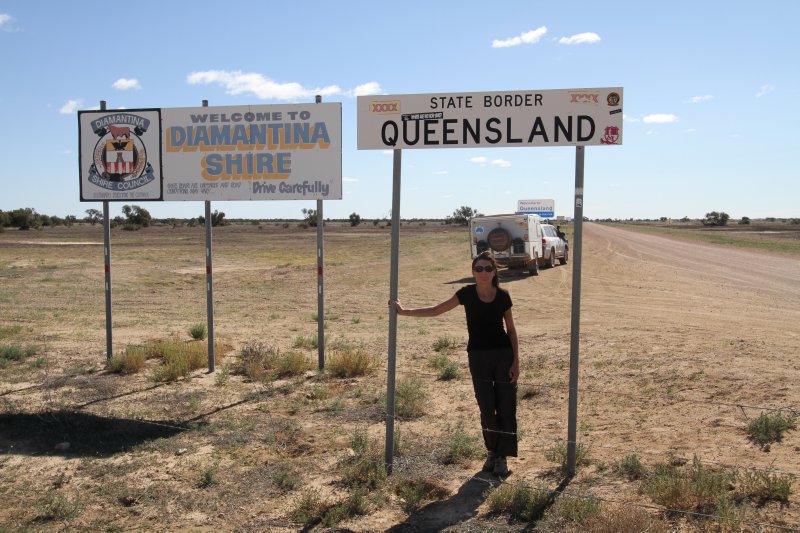 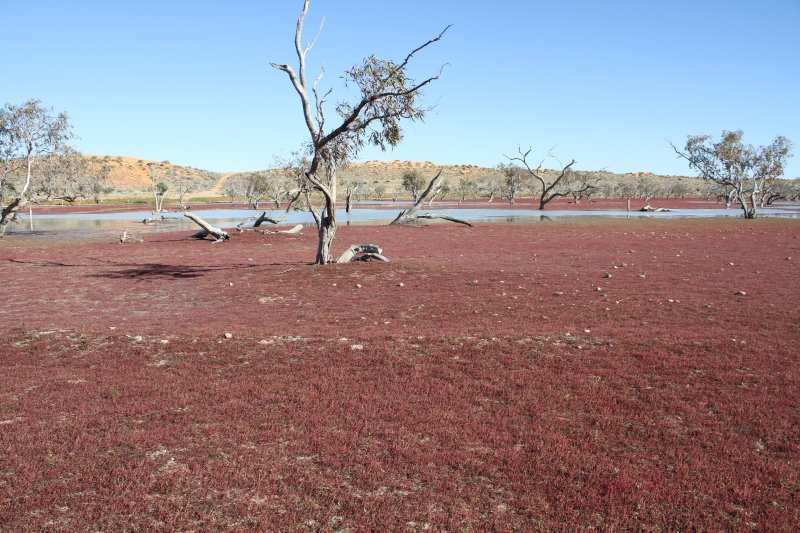 Lake Nappanerica with Big Red in the background 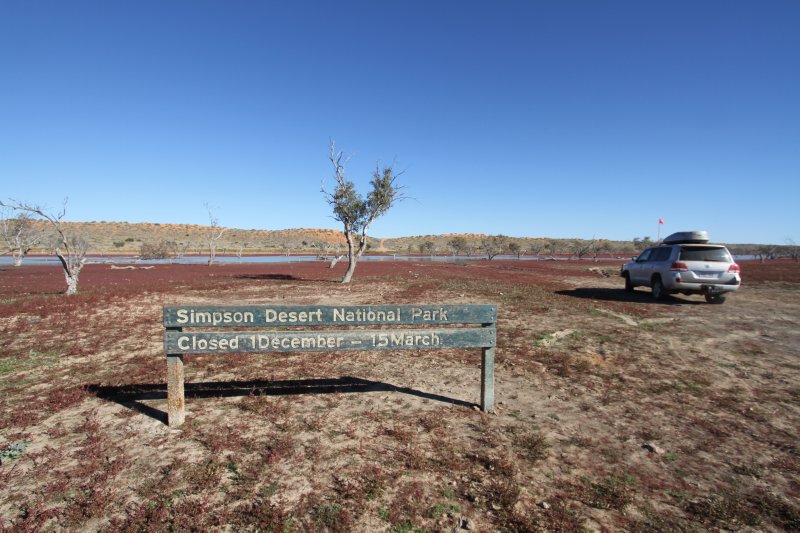 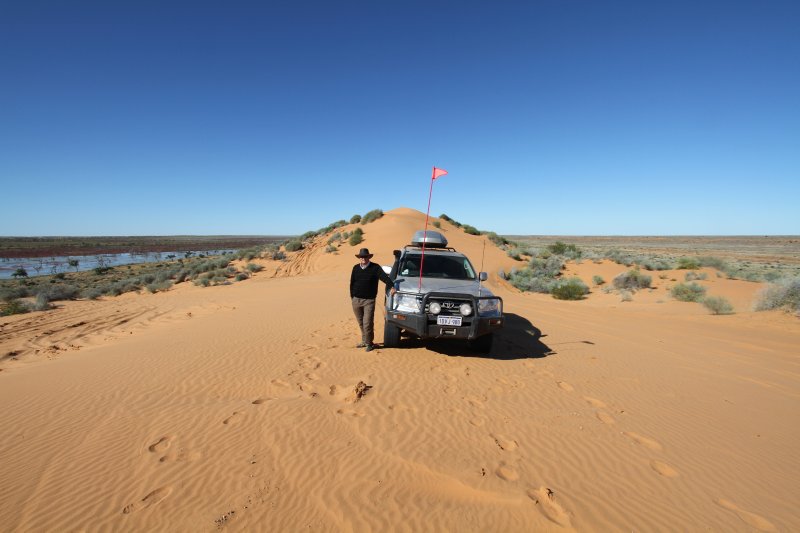 On top of the Big Red dune in the Simpson Desert 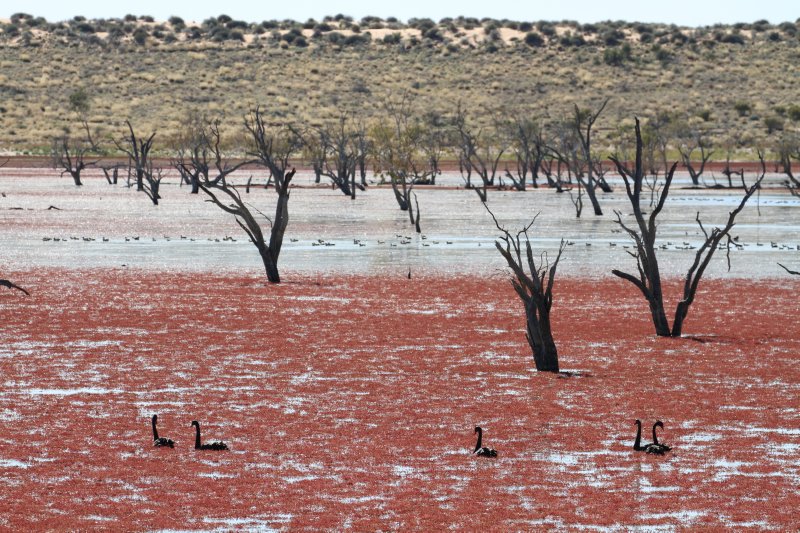 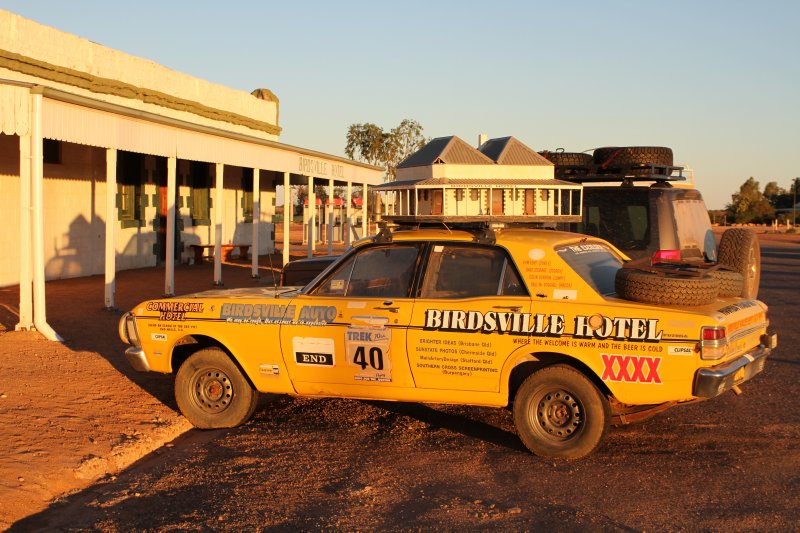 Posted by KobusM 20:36 Archived in Australia