When we entered the Pilbara region I was quite surprised by the beauty of the landscape. From my point of reference it was very similar to the Drakensberg foot hills but with the red rocks of the North West near Rustenburg. The Pilbara is the headquarters of the Australian iron ore industry and the mining activity was very evident along the road we travelled, with even one of the gorges named Rio Tinto Gorge . The roads here are bright red and the dust penetrates everything. Our Quantum camper/trailer is guarenteed to be dust proof but after travelling trough the Pilbabra I could find evidence of dust penetration at a couple of points. We also had bad luck with a stone thrown onto the windscreen from a road train and the brand new Landcruiser now has a cracked windscreen. I will wait until we have done most of the dirt roads before I replace it as the insurance only covers one free replacement.

We visited Karijini National Park first and stayed in Dales Campground. Karijini is Western Australia's secong largest national park and is set in the Hamersley Range. Massive mountains....by Western Australian standards...rise of the flat valleys. The high plateau is dissected by breathtaking gorges and tree-lined watercourses. We liked the generous space between campsites but the heat was just too much during the day. We did a long hike in the Dales Gorge and enjoyed swimming in Circular Pool, at Fortesque Falls and in Fern Pool. The rock formations in the gorges are specacular with exposed layers of bright red Iron Oxide, Dolomite and Shale with the odd streak of Asbestos.

After a couple of days we packed up and travelled to Millstream-Chichester National Park. The water that feeds the Millstream oasis streams from an aquifer estimated to be 2,000 square kilometers and is believed to contain 1,700 million cubic meters of water. I loved the swims in Deep Reach Pool and Crossing Pool with its tree lined shores. We camped at Miliyanha Campground but soon after setting up camp we realised we had a problem.....ants....millions of them, trying to invade our space. We have sort of learned how to cope with the flies but the ants were just too much for us. We went to bed early and left early the next morning. Quite a shame because it was a nice campsite with lots of trees, resident kangaroos and cockatoos.

We travelled on to Karratha and Dampier and it was the first time we tested the range of the Landcruiser as we travelled more than 600km without any place to refuel. The Landcruiser is more thirsty than what I estimated with an average fuel consumption of 20 liters/100 km whilst towing a fully loaded Quantum. We arrived in Dampier, exhausted from our rough week in the Pilbara, covered in red dust and it took me almost two hours to wask the Quantum and the Landcruiser. 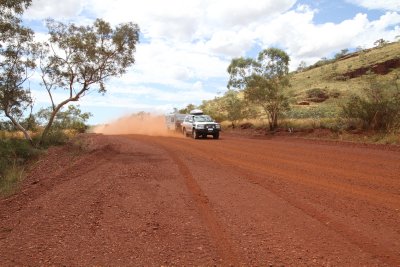 Red dust in the Pilbara 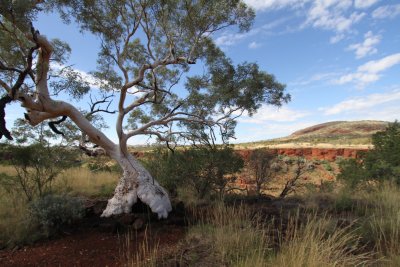 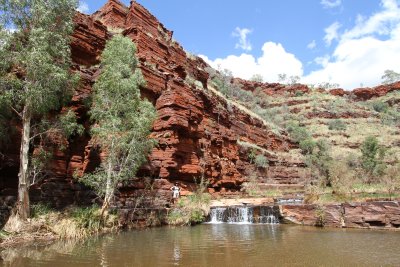 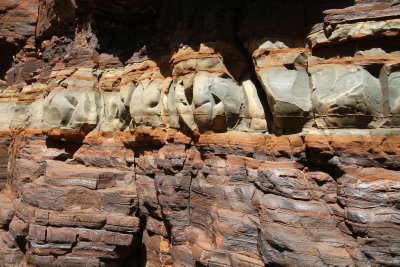 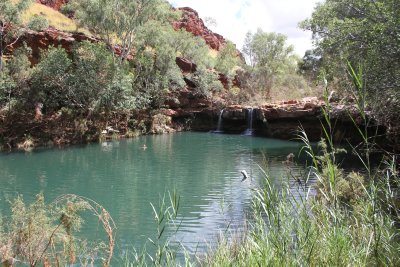 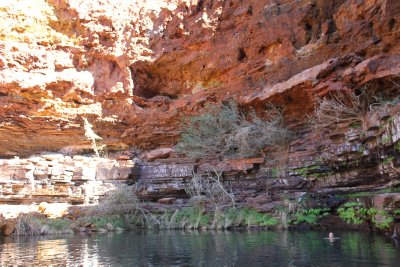 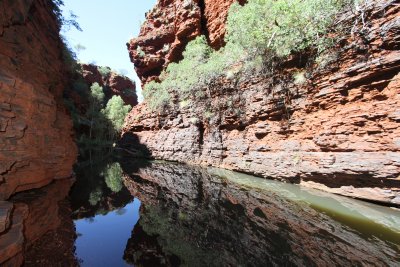 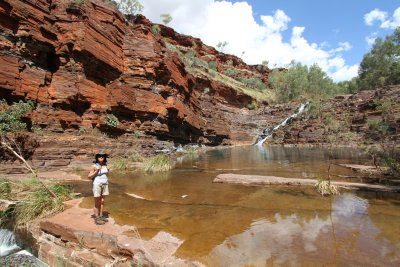 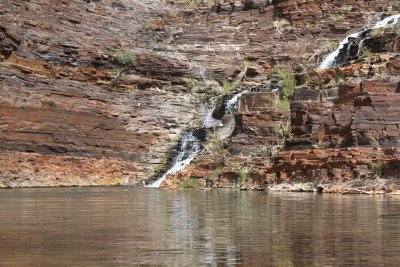 Cooling off under Fortesque Falls 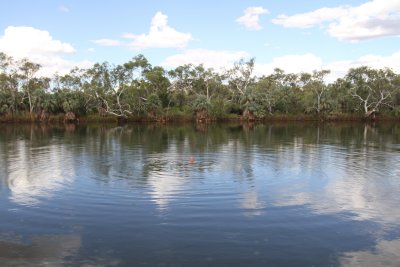 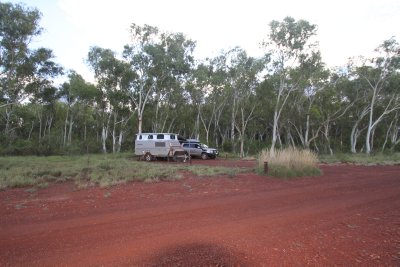 Posted by KobusM 02:54 Archived in Australia