Around and over Lake Eyre

From Coober Pedy we set off on a 1,300 km dirt road trip around Lake Eyre and the Simpson Desert. We first travelled 168 km east on a quite a good dirt track to William Creek. First settled in 1887, William Creek was originally a support station for camel drivers building the Overland Telegraph. It became a hotel in 1943 and is today classified as South Australia's smallest town, situated in the centre of Australia's largest cattle station, Anna Creek Station (23,000 square kms). William Creek boasts a population of three humans and one dog.

From William Creek we followed a badly corrugated 60 km 4WD track to Halligan Bay on the shores of Lake Ayre North where we camped for one windy night. The next day we tackled the track to get back to the Oodnadatta Track to travel to Marree, where we camped at the backyard of the Marree Hotel. The track follows the Old Ghan railway line from Marla to Oodnadatta and then on to Marree. There's lots of ruins, mound springs and railway sidings and rubble-art at Plane Henge. We explored the natural artesian springs within Wabma Kadarbu Mound Springs Conservation Park. The Bubbler mound spring is created from water deep within the Great Artesian Basin which filters to the surface forming mounds and bubbling ponds. The wetlands created by the spring's overflow provide habitat to a variety of waterbirds.

Lake Eyre is the largest lake in Australia when it is full or the largest salt pan when it is empty. It is also the lowest point in Australia, at about 15 meters below sea level. It is actually two lakes, North and South with an interlinking channel that rarely flows. Lake Eyre rarely fills up but in the last three years (strong La Niña years) the lake flooded consistently and although it was only 30% full when we visited, it is still an impressive sight, especially from the air. We took an hour and a half scenic flight from Marree. The lake is named after Edward John Eyre who was the first European to sight it in 1840. Lake Eyre has been a site for various land speed record attempts on its salt flats, especially those by Donald Campbell with the Bluebird-Proteus CN7. It reminds me a lot of the Makgadikgadi Pan in Botswana, which we crossed with my sons in two 4WDs a few years ago.

Many people have died from exposure visiting Lake Eyre. One story that I will always remember also featured in one of Ray Mears' Survival episodes: On the 11th of December 1998 tourists Karl Goeschka and Caroline Grossmueller from Austria left William Creek Hotel to travel 60 km East to Lake Eyre. Before leaving the hotel the couple signed their name in the register letting the boy behind the counter know about their whereabouts. In case they would not be back within a few days he should raise the alarm. After arriving at the lake, unfortunately their campervan got somehow stuck in the sand and Karl twisted his ankle while trying to free the vehicle. They stayed at a bush camp where a large water tank provided hundreds of litres of water and the couple had enough food to survive for weeks. Karl and Caroline were confident that the hotel boy would raise the alarm and that someone would come to their rescue. But after days of waiting at the banks of the dry lake, there was no sign of help. Caroline Grossmueller, a trained mountain walker, became worried that somehow they were forgotten. As it happened, the boy had left the hotel the following day after his father returned. By mistake he had written the whereabouts of the Austrian tourists in the old register book and his father only checked the new book not finding any names in it. Caroline decided that she could not wait any longer. Leaving injured Karl behind, she took seven litres of water in two containers and headed off in the middle of the night. As an experienced walker she estimated she could do about 4-5 km an hour in the cool night, making it possible to do the 60km in less than 12-14 hours, just enough time before the heat of the day would become unbearable. However she clearly underestimated the roughness of the terrain and maybe also the weight of the water containers. She only covered half the distance and was found one day later by two German tourists. Caroline had perished at the site of the road, half way between Lake Eyre and the Hotel. She managed to walk about 30 km before collapsing. She did not die from a lack of available water as she still carried almost 2 litres of water on her. During the inquiry of her death, the coroner attributed her death to "heat exhaustion and exposure". Karl was rescued that same day. The story holds two valuable lessons for people who plan exploring the fantastic outback of Australia. First: you must never leave your vehicle, as it provides protection to the heat and a car can be found easier from the sky by search planes than people. Second: Learn about the technique of four wheel driving. It appeared that the couple’s 4WD's tyres were not deflated and it took the rescue team a few minutes to deflate the tyres and recover the vehicle. The vehicle was also in "axle-twist", meaning that the front and rear axles were at an angle to each other. Since the differentials were not locked, this meant that power was not being applied to the wheels that were in contact with the sand, and so no traction could be obtained preventing the wheels to turn. If they had known more about 4WD technique, this tragedy would probably never had happened! There is a memorial for Caroline Grossmeuller where she died.

From Marree we followed the famous Birdsville Track on the eastern side of Lake Eyre through the Sturt Stony Desert to Birdsville in South-West Queensland. I will give more details about the Birdsville Track in my next blog. We have now arrived in Birdsville, Queensland (and changed our clocks forward another 30 minutes) and plan to drive out to the Simpson Desert tomrrow to visit and drive the Big Red Dune.

We will spend the next three and a half months in Queensland. 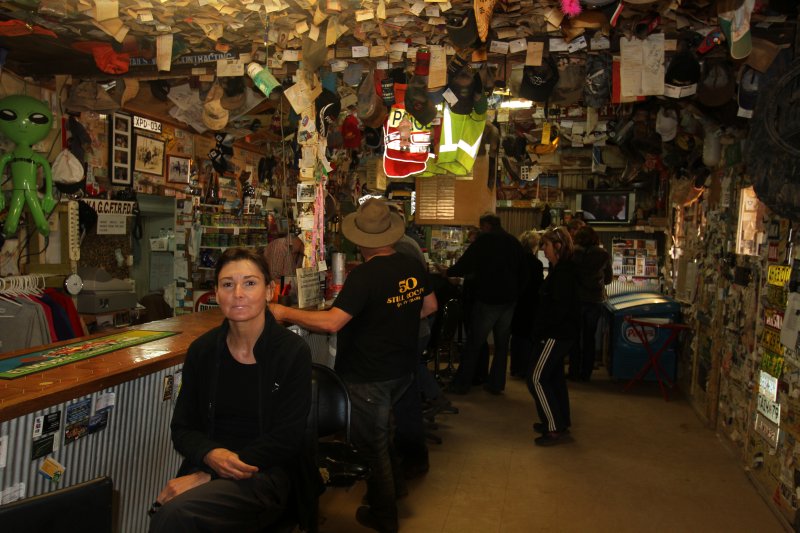 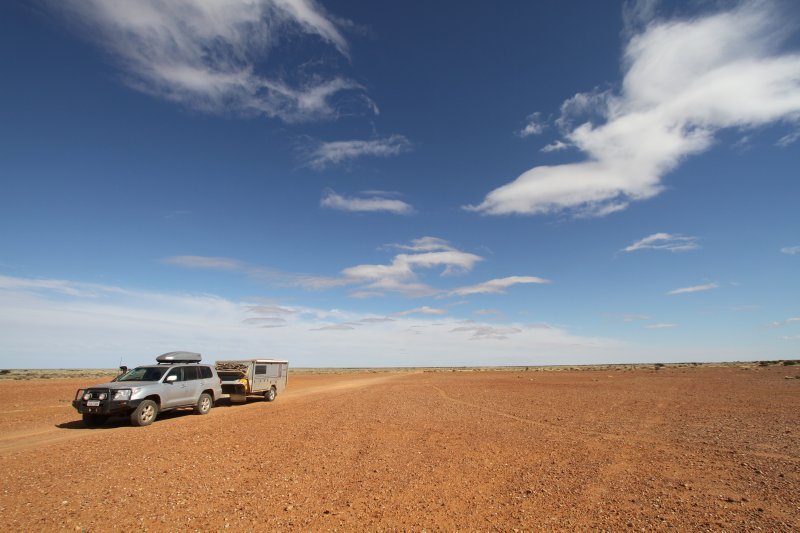 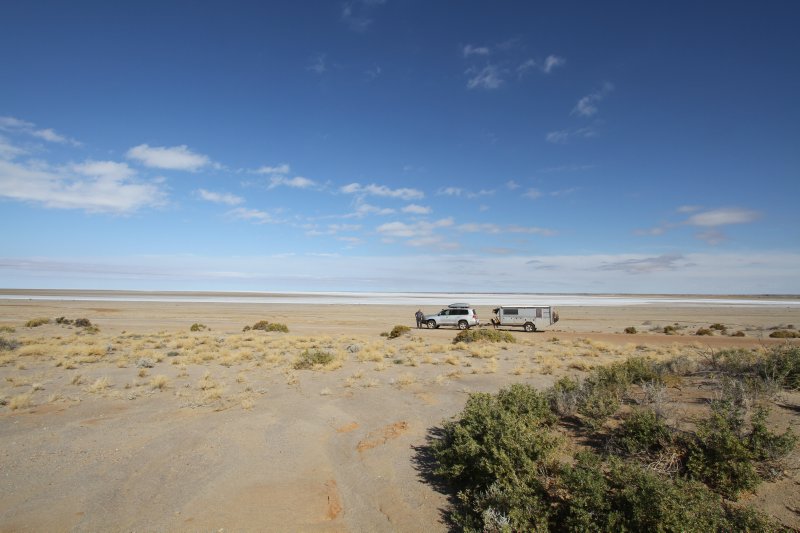 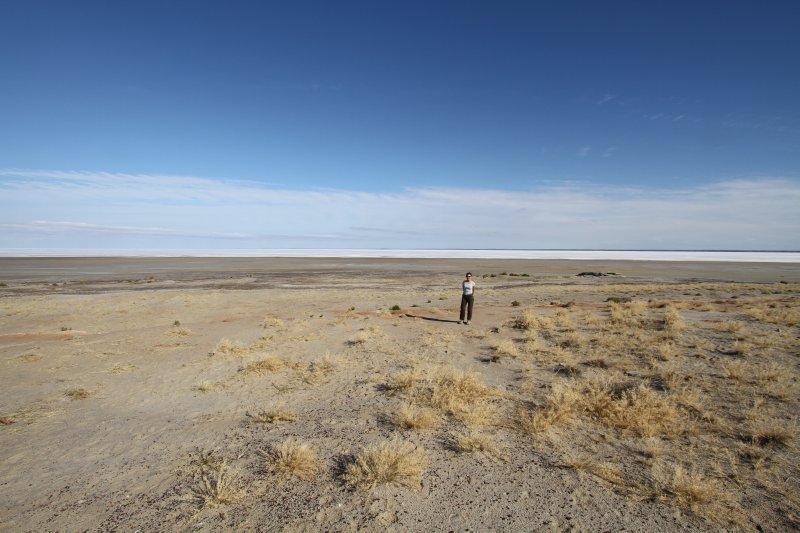 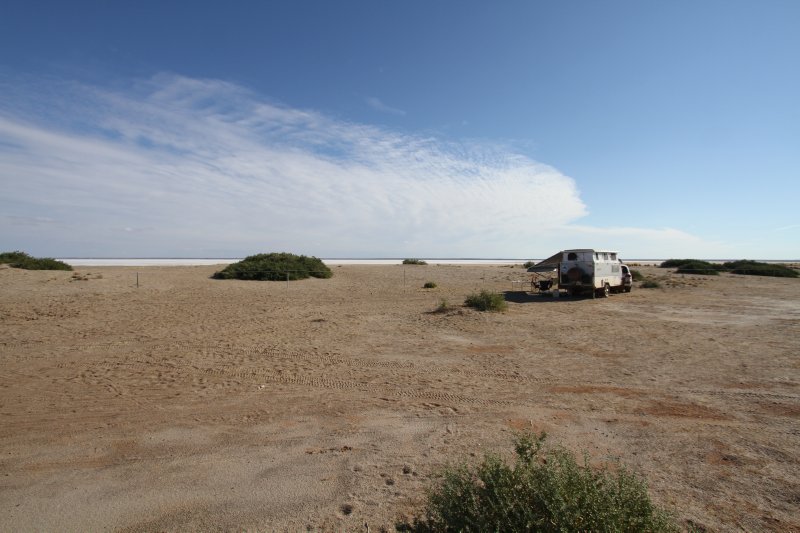 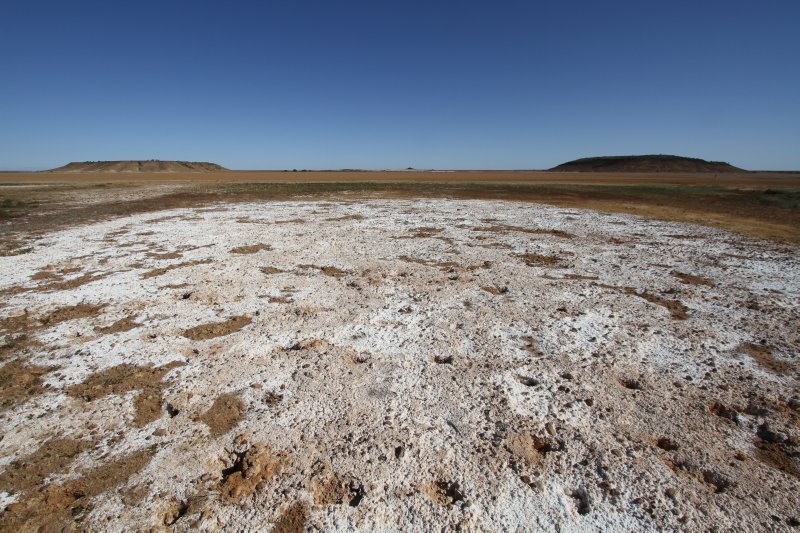 Saltpan next to the Oodnadatta Track 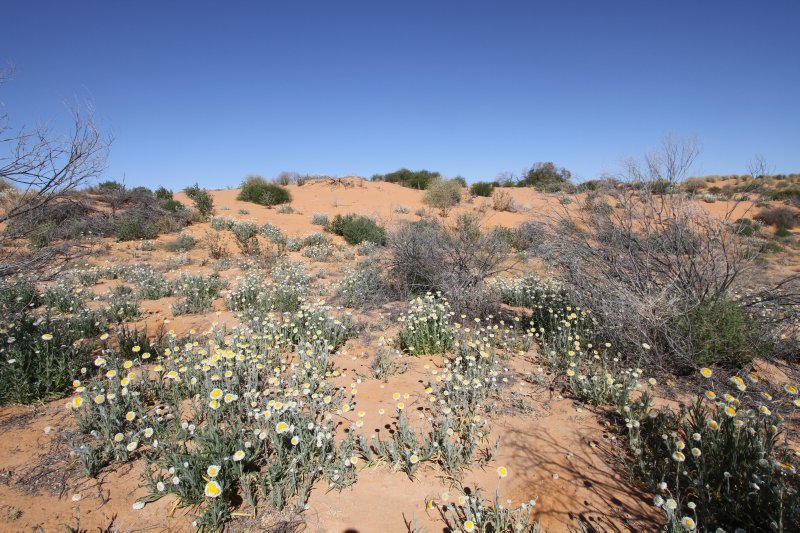 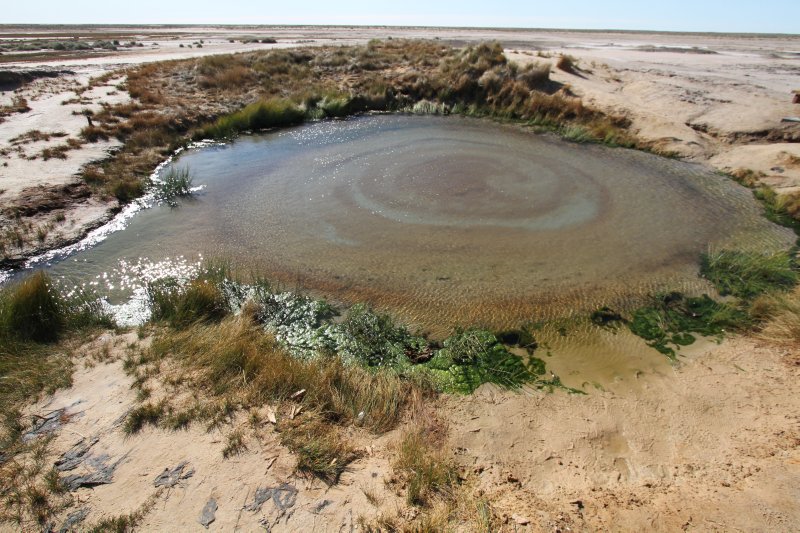 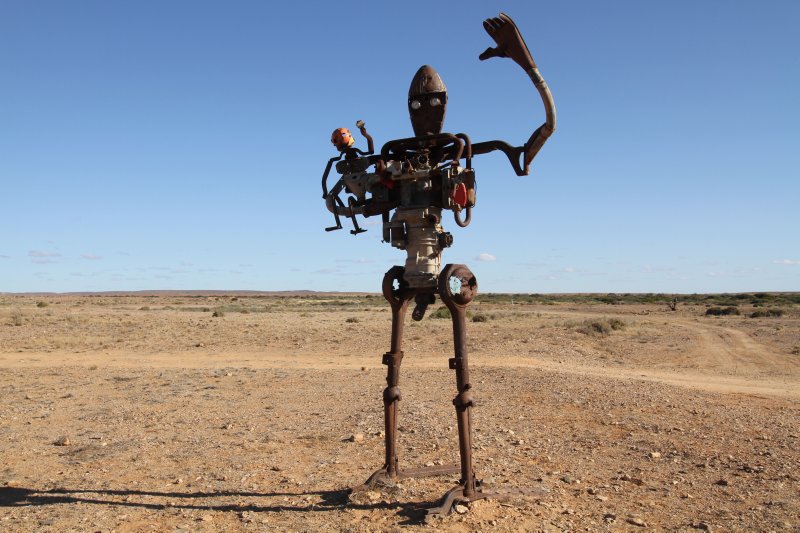 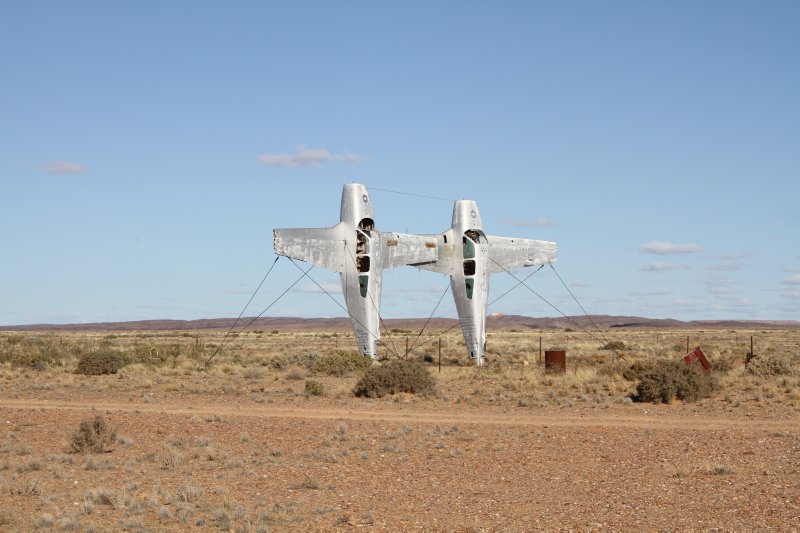 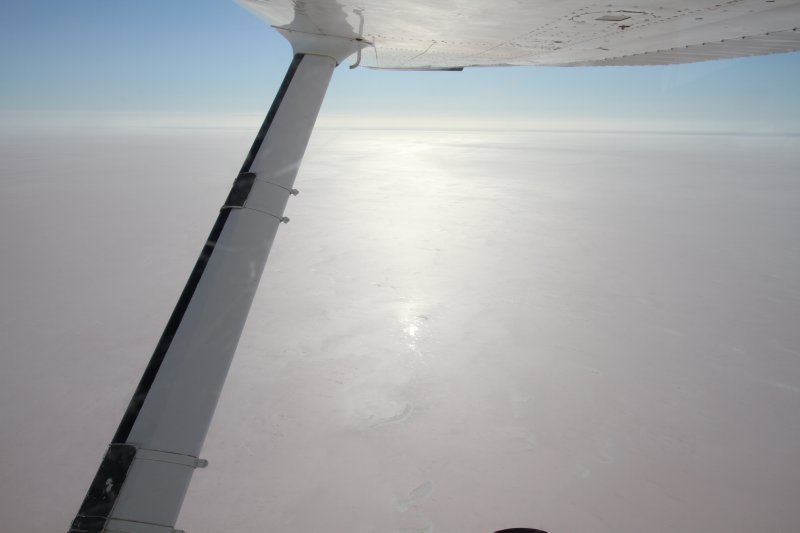 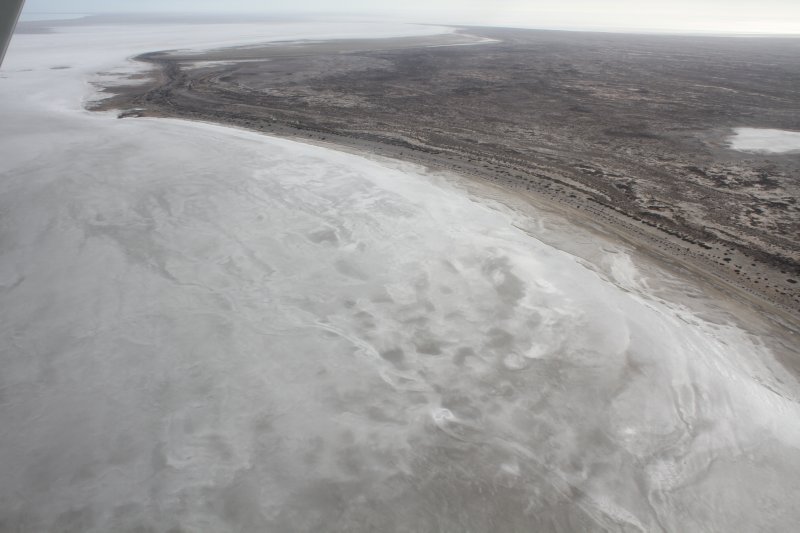 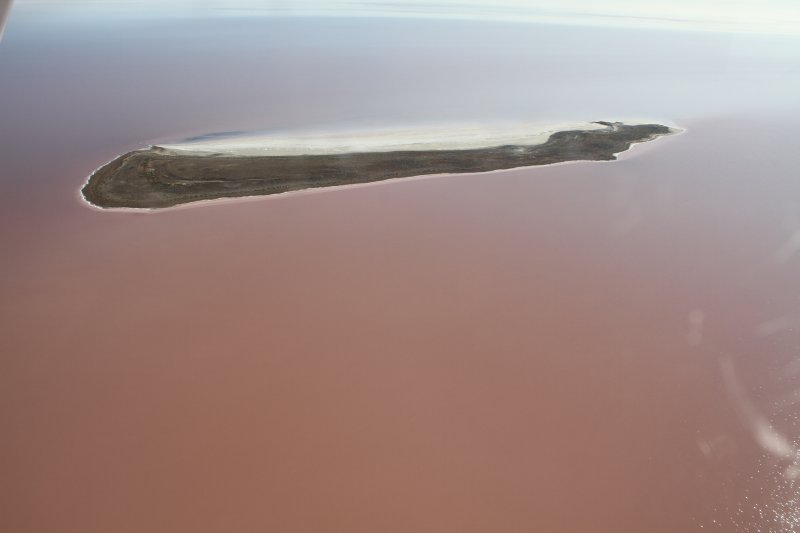 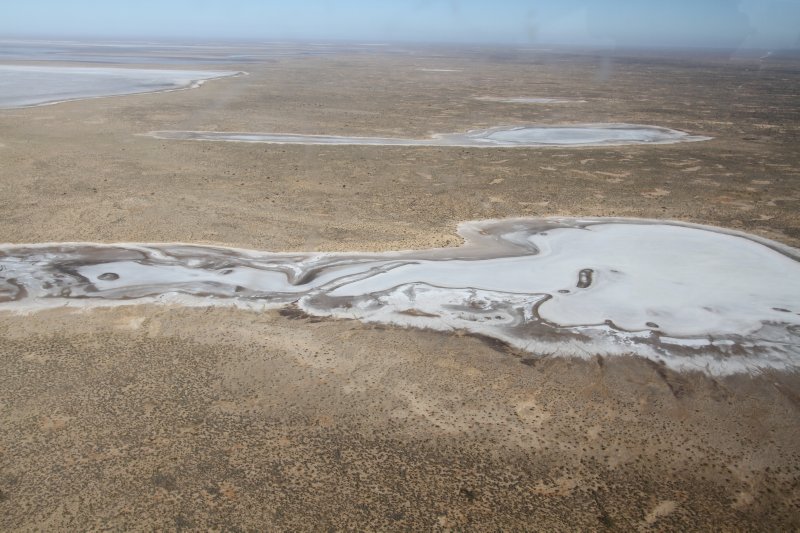 Posted by KobusM 22:54 Archived in Australia