Opal Capital of the World

On the way to Coober Pedy we stopped at Kulgera Roadhouse, the last pub on the Stuart Highway in the Northern Territory, to have pies for lunch and later continued to cross the border into Southern Australia and camp at Agnes Creek Rest Area next to the Stuart Highway. It surprised us to find the free camp area secluded and well hidden from the road, with nice views of the surrounding countryside and we had a lovely evening with a campfire and campoven dinner.

Coober Pedy is well known for its opal and underground living. The first European explorer to pass near the site of Coober Pedy was Scottish born John McDouall Stuart (the Stuart Highway is named after him) in 1858, but the town was not established much later, when opal was discovered by Willie Hutchison here on 1 February 1915. Hutchison drowned 5 years later trying to do a creek crossing with cattle. Since then Coober Pedy has been supplying the world with gem quality opal. There are thousands of mine heaps, shafts and dugouts in and around Cooper Pedy and many of the mines are still in operation. There are many underground dugouts to explore, including underground homes, museums, shops, hotels, campground, churches and the Old Timer Mine. All these dugouts were built to avoid the scorching heat during summer daytime and remains at a constant temperature. In Coober Pedy they play golf at night in the summer with headlights and fluorecent balls. The golf course is completely free of grass and golfers take a small piece of "turf" around to use for teeing off. It has a desrt climate and in winter it gets freezing cold during the night and our Swedish thermals came in very handy. The name Coober Pedy comes from the local Aboriginal term kupa-piti, which means 'whitefellow in a burrow'.

We also visited The Breakaways Reserve 33km north of Coober Pedy. The reserve gets the name because the plateaus, mesas and massive rocks look like they have broken off the 'main land' from a distance. The formation of the Breakaways landscape is said to be from the evaporation of an inland, ancient, Australian sea. The Big Dog Fence also runs past the Breakaways and is 5,614 kms long, the longest fence in the world and it was erected in the 1880s to keep dingoes out of the southern part of Australia and away from sheep. The Breakaways has featured as a backdrops in many films, eg. 'Priscilla Queen of the Desert', 'Red Planet' and 'Mad Max, Beyond Thunderdome'.

We stayed three days to get rid of all the red sand of the Red Center, for Lorraine to complete her study assignment, to explore this facinating little outback town and to get ready for the next trip through the desert. We will be travelling on desert dirt roads and 4WD tracks for the next 1,300 kilometers to get around Lake Eyre to Birdsville, Boulia and Mount Isa in Queensland. We will be travelling to William Creek and from there on the Oodnadatta Track and Birdsville Track around Lake Eyre and will only be able to update the blog when we get to Birdsville in about 5-6 days.

People ask us what our route is, not noticing that it can be viewed on this blog by enlarging the map above (clicking the + several times) and dragging it. Hovering over the dots displays the place name. The route does not follow roads but gives you an idea of the places we are planning to visit and the general route. 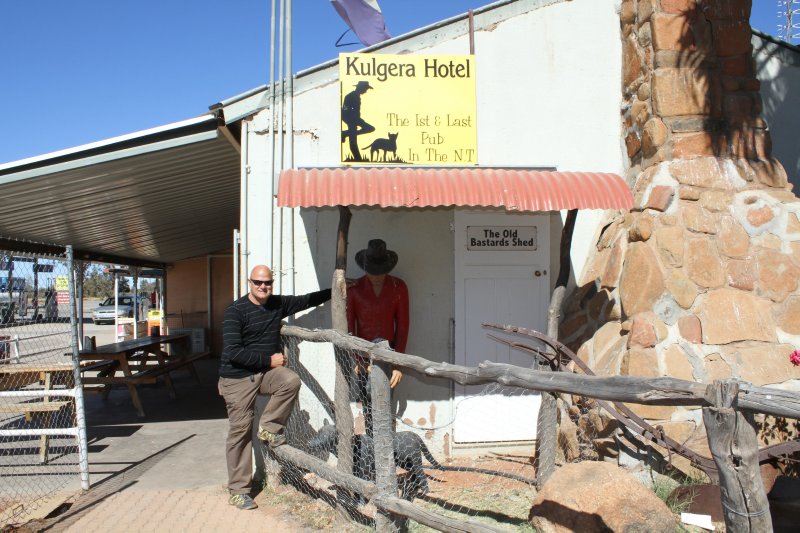 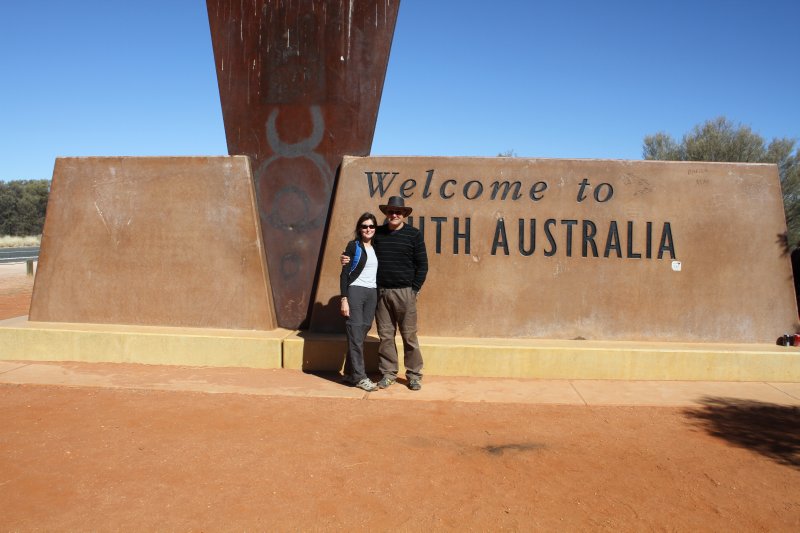 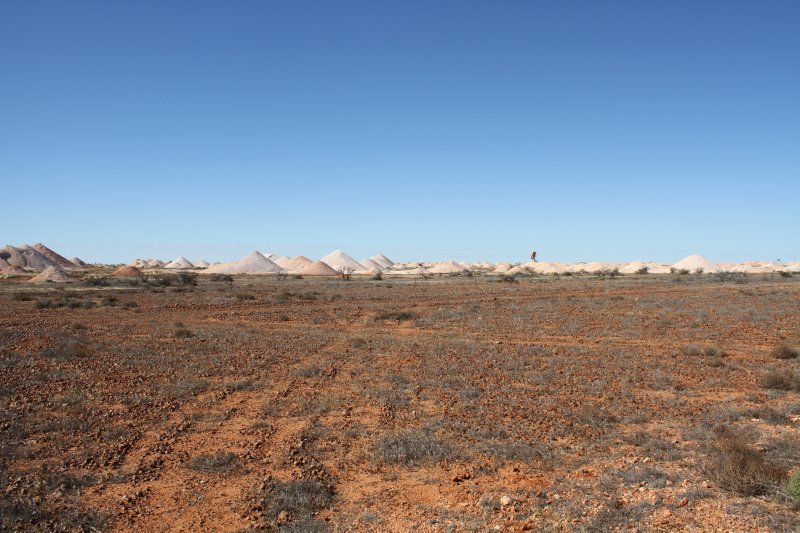 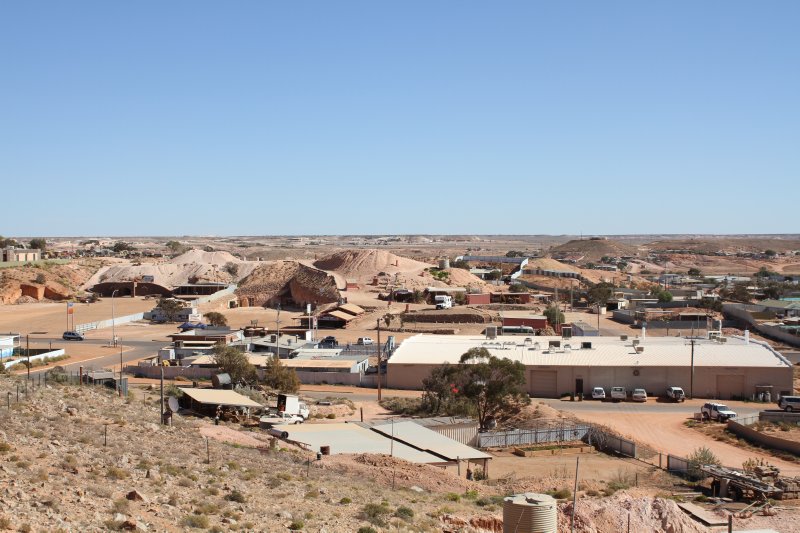 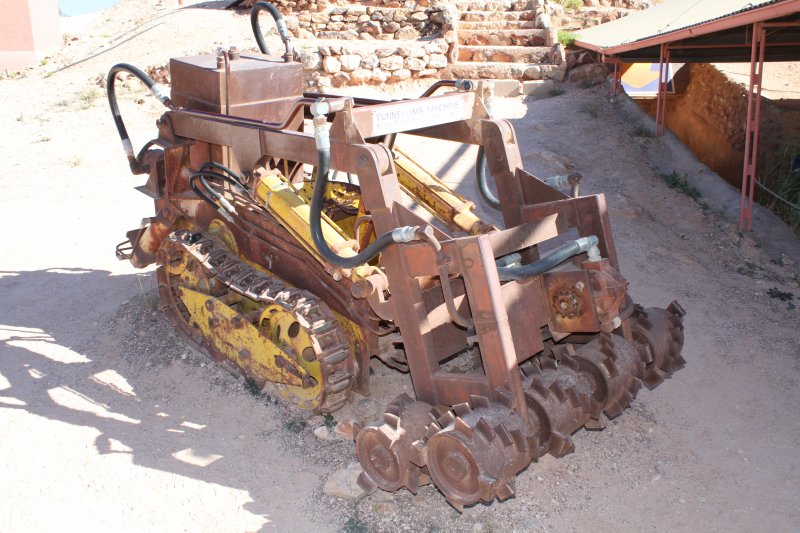 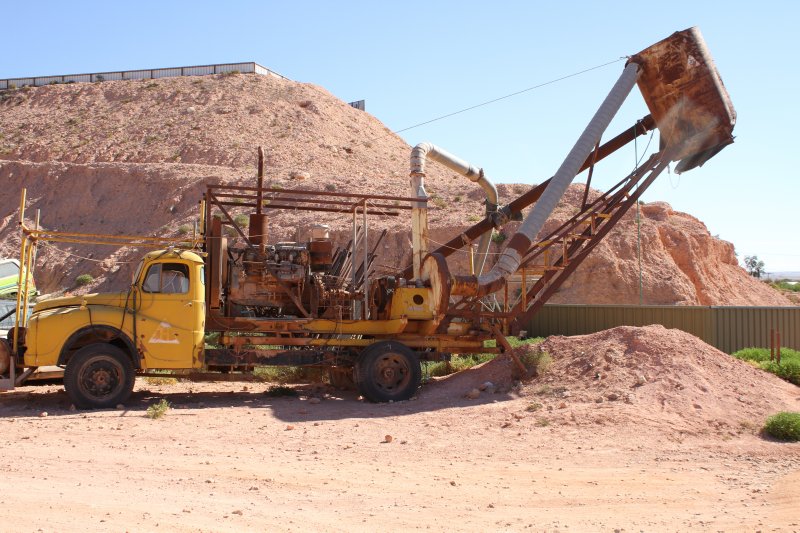 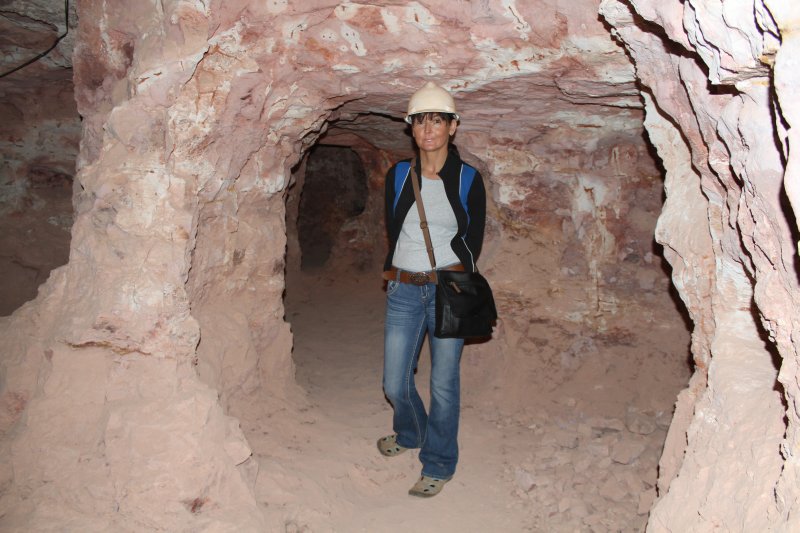 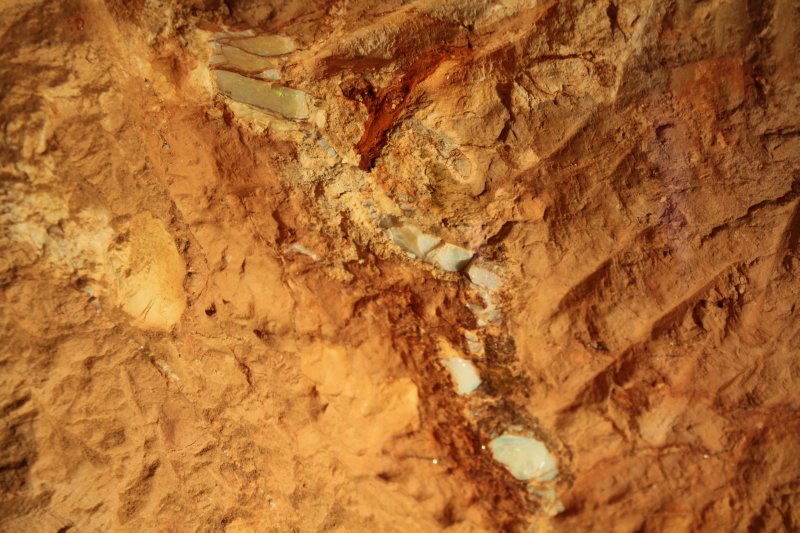 Opal seam in the Old Timers Mine 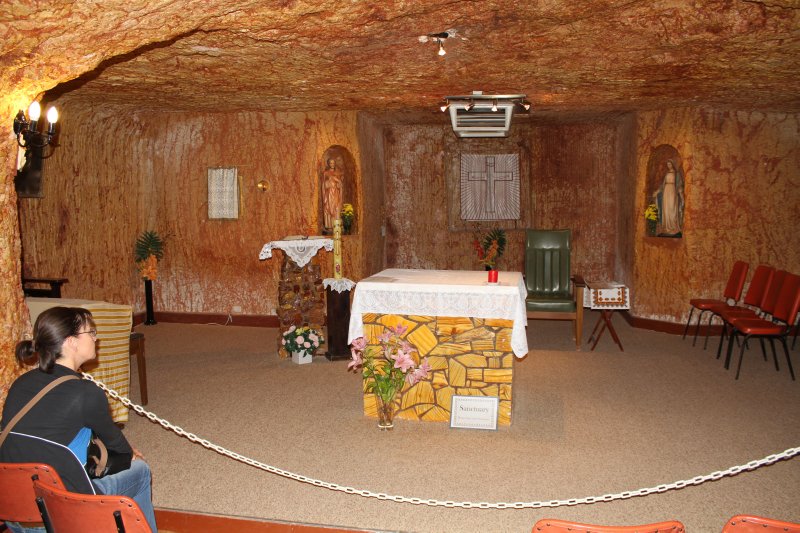 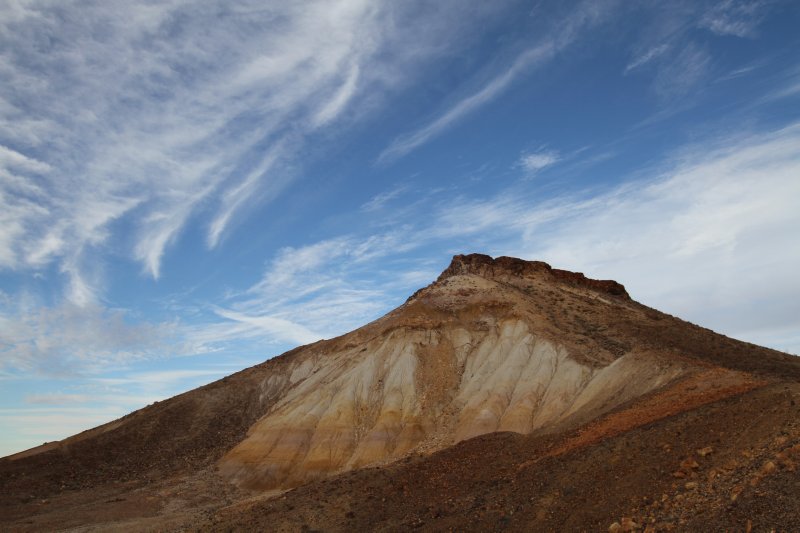 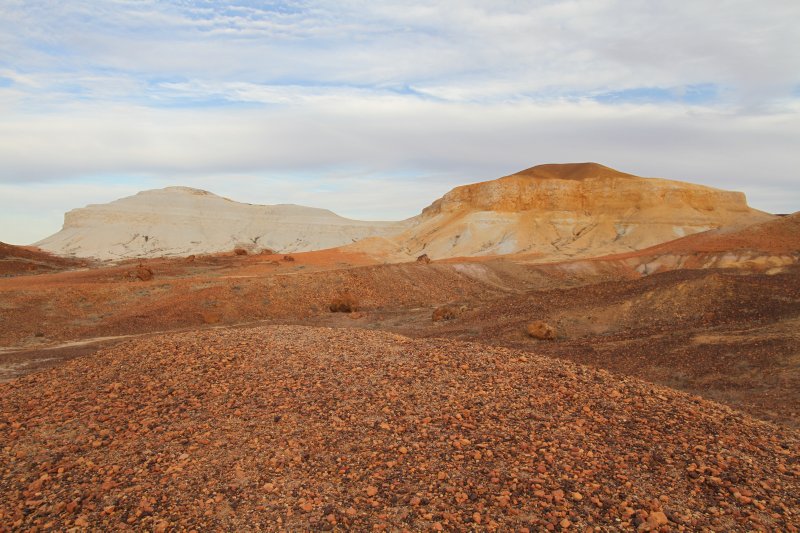 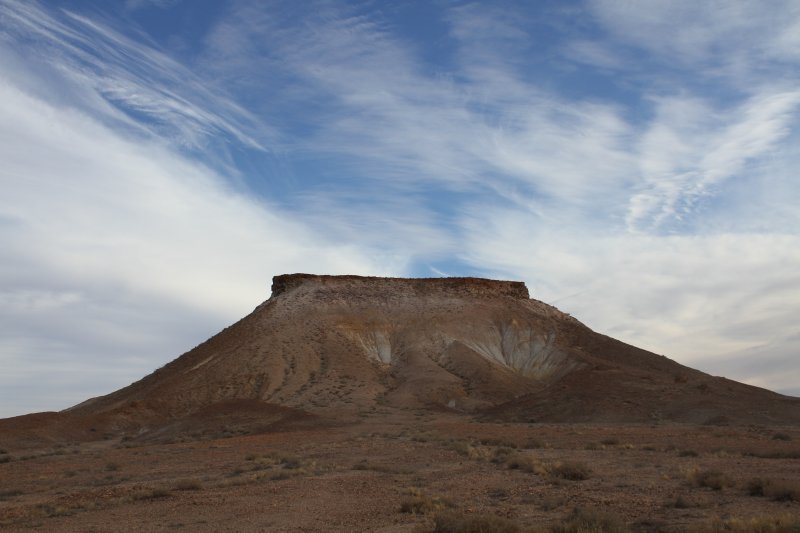 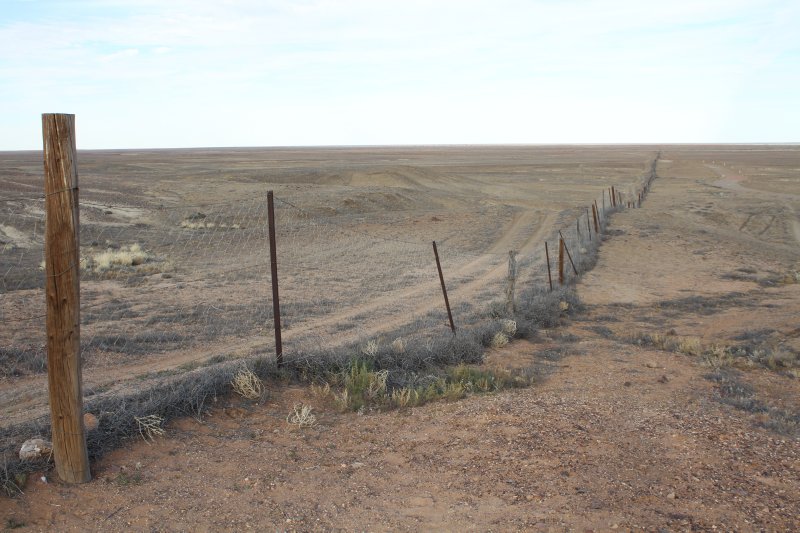 Posted by KobusM 02:01 Archived in Australia