We headed further south after Mataranka and stopped at the Larrimah Inn (only for a look, not a drink), the first of a series of quirky pubs and inns on this part of the Stuart Highway. The Larrimah Inn is famous for being the highest pub in the Northern Territory, a mere 181.04 meters above sea level. Is that measured on top of the pub's roof? It also has a large Pink Panther and a huge replica of a stubbie (small beer bottle), as well as a microlight in front of the pub. The inn served as an officers mess during WWII.

The next pub is the famous Daly Waters Historic Pub where we stayed overnight in the caravan park, which was packed to capacity and beyond. The current corrugated iron pub dates from 1934 and began as a service to Qantas customers on the nearby runway and terminal which was the first international airport in Australia and a refuel stop to Singapore. There has been a Daly Waters Pub on site since 1893, which offered a watering hole to drovers on the track. The inside of the pub is very interesting with lots of paraphernalia hanging from the ceiling and pasted to the walls, including shirts, caps, banknotes, ID cards, licence plates, sandals and underwear!! We enjoyed a delightful evening in the pub, eating Beef & Barra BBQ and listening to the live entertainment led by singer/poet/comedian Chilli with Reflections of an Aussie Spirit. I checked the elevation in Daly Waters and it is confirmed to be 212 meters OSL, so it is unclear how Larrimah could claim status as the highest pub in NT. Maybe they mean its the highest in Larrimah....

The next day we headed further south and stayed for one night at Banka Banka but first stopped at Renner Springs for pies. Renner Springs also has a characterful roadside pub crammed with memorabilia. After Banka Banka we headed for Devil's Marbles (see seperate blog). After Devils Marbles we stopped at Barrow Creek Roadhouse to look at their 1929 pub plastered with banknotes and had pies there as well. We briefly stopped at Wycliff which has a UFO pub, being the top UFO spotting place in Australia and also at Ti Tree which host the Ti Tree Roadhouse and Pub which boast being the most central pub in Australia and that is for real.

Our last stop was at Aileron which hosts the Glen Maggie Bar, but the main attraction here is a 17 meter iron sculpture of Ammatjere Man an Aboriginal local rainmaker Charlie Quartpot, towering over Aileron.

Our favourite pub? Daly Water Historic Pub by far!! We crossed the Tropic of Capricorn, having travelled 1,900 km from the top of the Northern Territory, leaving the warm tropics for a couple of weeks to explore Alice Springs and the Red Center.

The Stuart highway is 2,834 km long and stretches over the continent from Darwin, Northern Territory to Port Augusta, South Australia. The highway is named after John McDouall Stuart who was the first European that crossed Australia from south to north, but only on the 6th attempt. The highway approximates the route Stuart followed in 1862. There is a memorial of Stuart next to the Stuart highway at a point which is almost at the geographical centre of Australia. 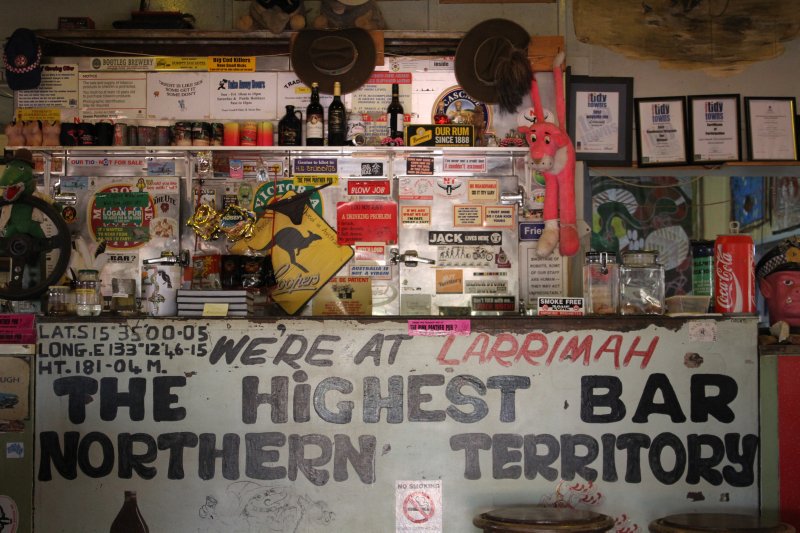 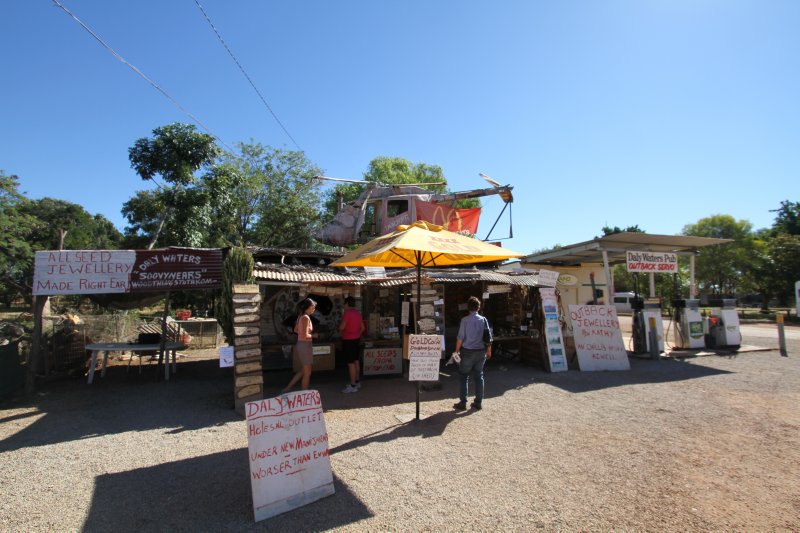 The only shop in Daly Waters shop 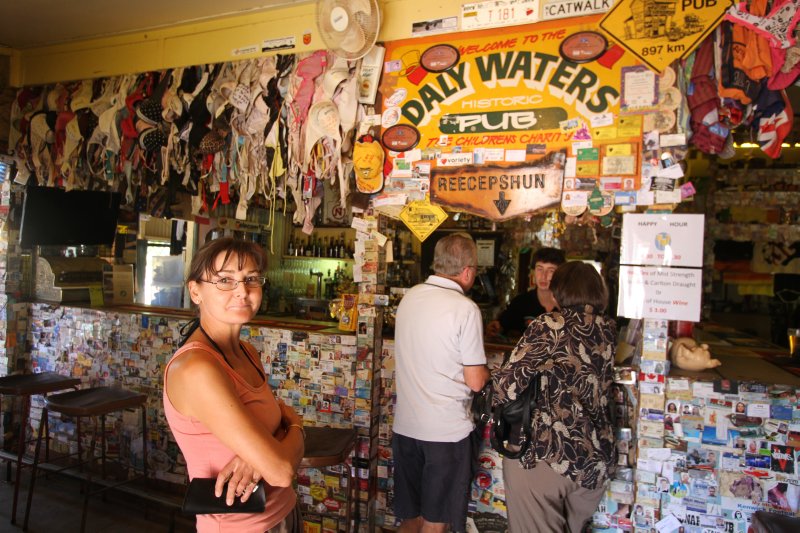 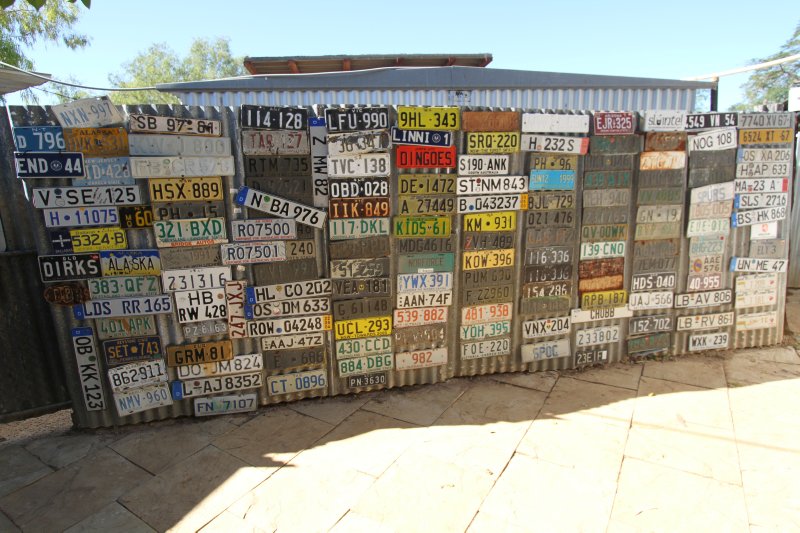 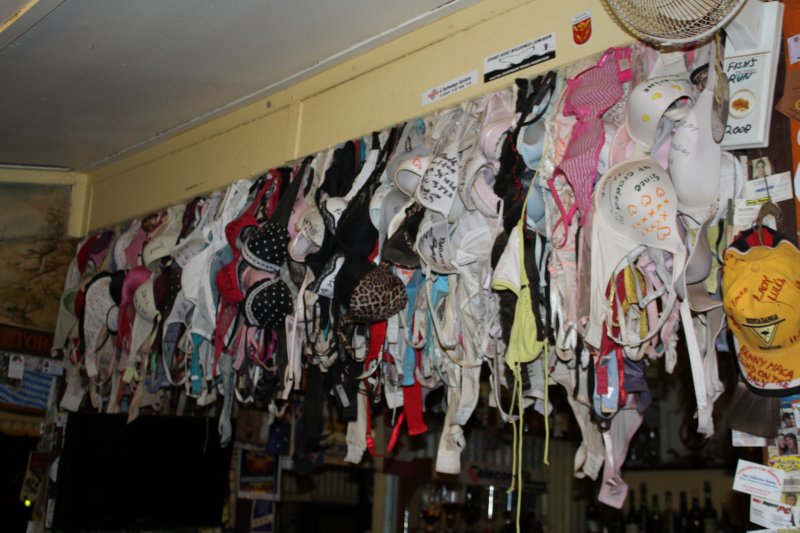 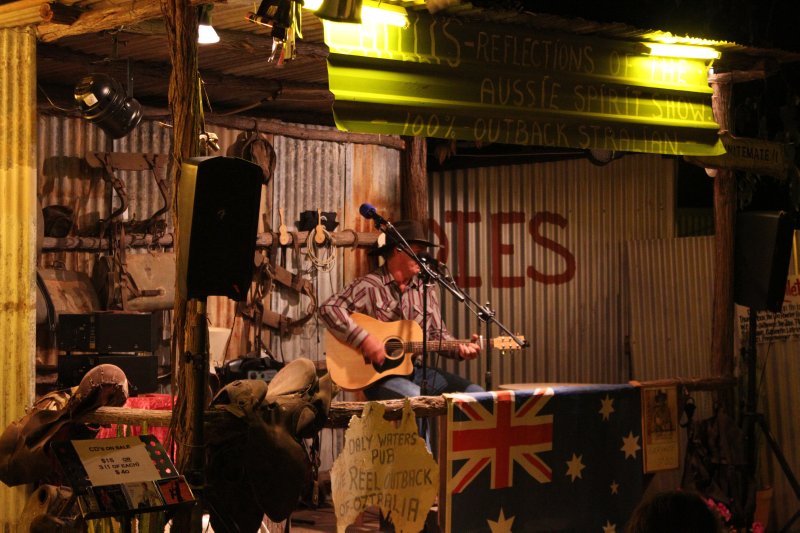 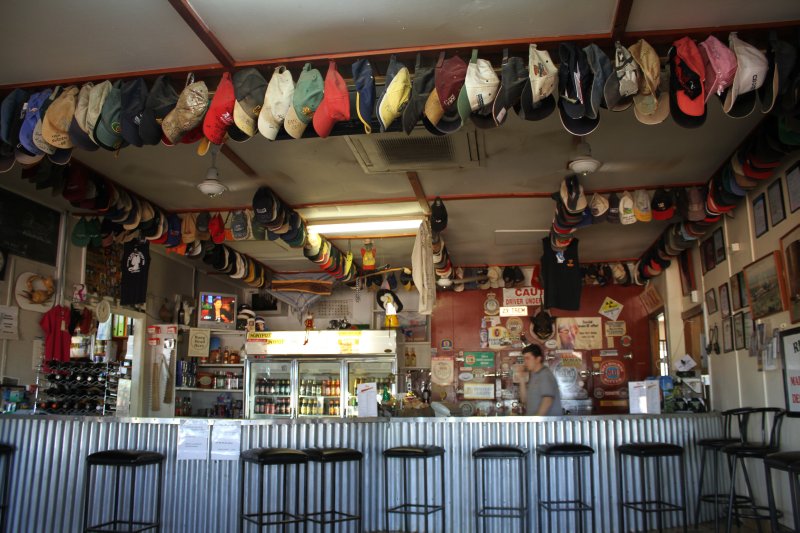 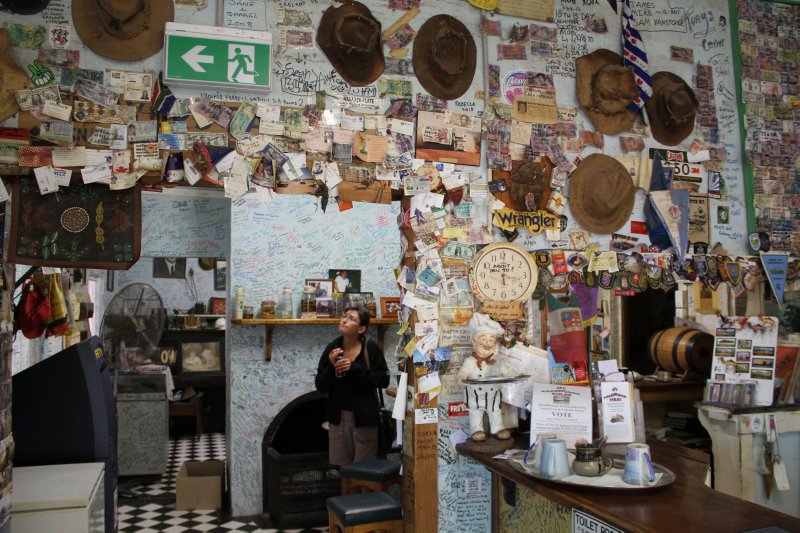 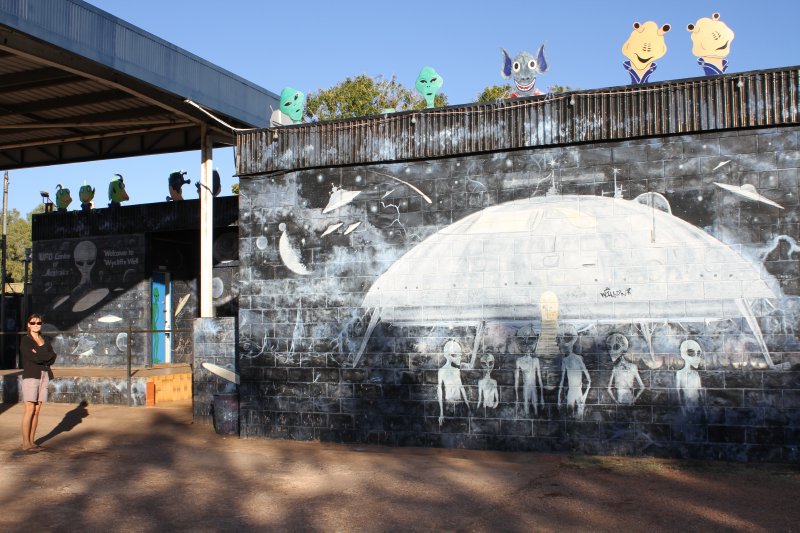 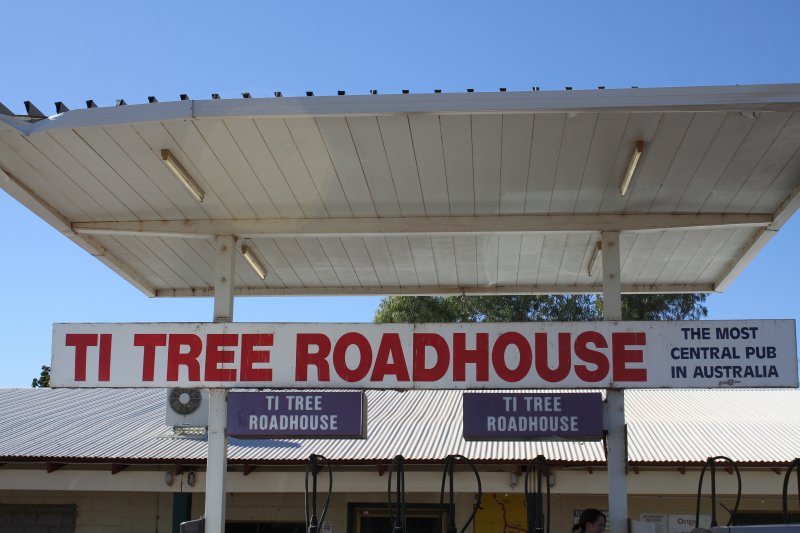 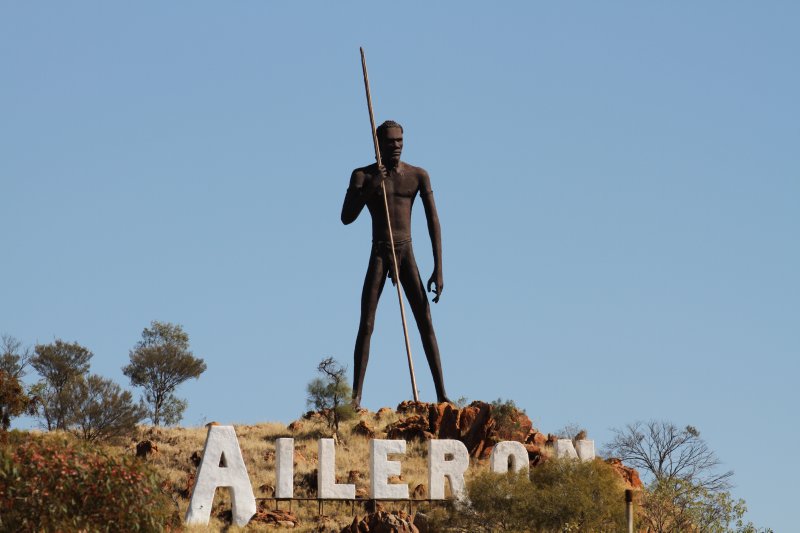 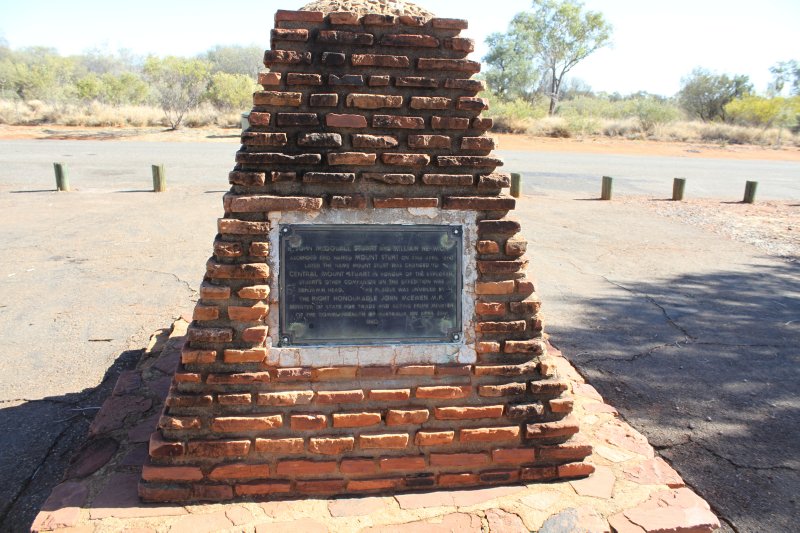 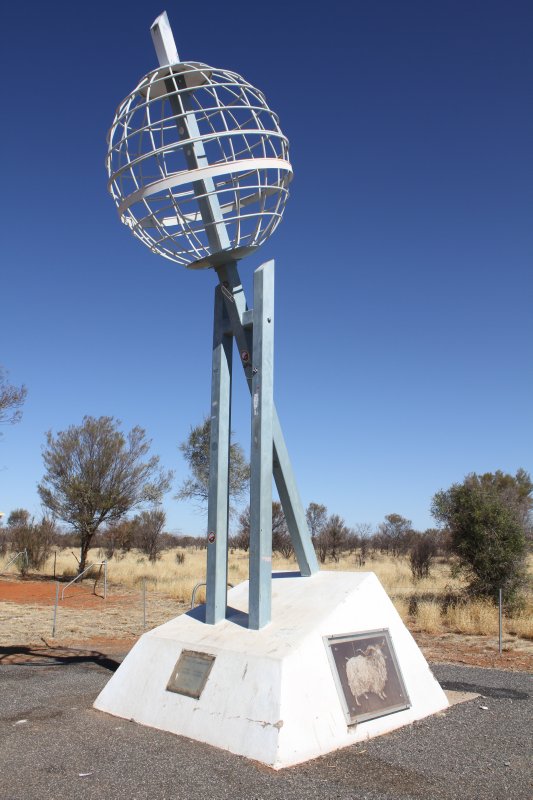 Posted by KobusM 23:06 Archived in Australia

I like the spelling of "reception" at Daly Waters pup, but guess when you need a reception to get a beer WHO CARES!!
Have a good one!