Snorkeling with a whale shark has been as exciting as I remembered it from more than 10 years ago. We searched for about an hour before we found this juvenile male, about 5 meters long. I had great views of it, swimming within 3 meters from its head for more than an hour. It is such a privilage to swim with these magnificent creatures, the biggest fish on earth.

Whale sharks come to Ningaloo Reef every year to feed on the spawning coral pollups and on plankton. They can grow to 12 meters but even the 5 meter juvenile looked enormous under the water.

I did a scuba dive before the whale shark swim but that was dull compared to the fantastic whale shark encourter. 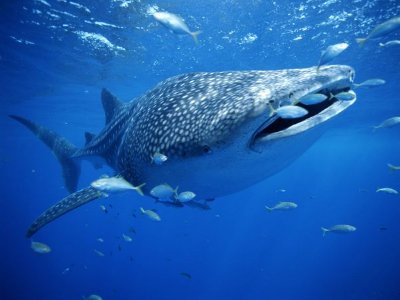 Posted by KobusM 19:31 Archived in Australia

I love your regular updates. It truly is an effective way of sharing your adventures ... it makes it possible to visualise everything.

Glad you both seem to be well